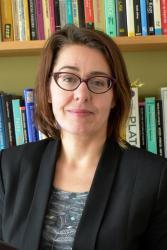 I use ideas from social and political theory to try to illuminate concrete problems of structural injustice, like poverty and exploitation. I have also written about the justice claims of cultural and religious groups within the context of constitutional democratic states. My new book, Poverty, Solidarity, and Poor-Led Social Movements (Oxford University Press, 2021), argues that progressive and just poverty eradication needs to be centered on the analyses and aims of poor-led social movements and their organizations.

In 2022, I co-founded the Engaged Theory Community, a global network that connects political philosophers and theorists who do grounded and engaged normative political theory.

Note to prospective graduate students: I supervise M.A. and Ph.D students in social and political philosophy, normative and applied ethics (including development ethics), and feminist philosophy. If you are a prospective M.A. or Ph.D. student and your research relates to issues of global or social justice, you will automatically be considered for additional support under the auspices of the Canada Research Chair in ethics & global social change.  If you are interested in doing socially-engaged philosophy or political theory with an empirical research component, consider applying to join our Grounded & Engaged Theory Lab.

Post-doctoral scholars working on topics related to global justice can also be hosted under the auspices of the Canada Research Chair that I hold.  Recent post-doctoral fellows: Dr. Jennifer Szende (PhD, Queen's) and Dr. Cristian Dimitriu (PhD, U Toronto).

In 2012, I started up Initiatives in Global Justice (IGJ), a research consortium of U of Guelph researchers which featured talks and other programming on ethical and political issues related to globalization; IGJ was phased out in 2021. In 2022, Dr. Candace Johnson (Political Science) and I started up the Grounded & Engaged Theory Lab.at the University of Guelph.

I have co-organized and hosted the following international workshops:

Theoretical Explorations of Exploitation in Practice at the University of Guelph, October 2015

Thinking Beyond Distribution: A Workshop on Global Justice, held at the Centre for Ethics at the University of Toronto in October 2012

Rethinking Inequality: Philosophical Reflections on Recent Empirical Research, held at the University of Ottawa in November 2012

Professor and Tier I CRC in Ethics & Global  Social Change (renewed 2018), Dept. of Philosophy, University of Guelph, 2010 to present.

June 2017 "Movements versus Markets: What, If Anything, is Special About the Organizations and Social Movements of the Poor?" University of British Columbia workshop: New Directions in Ethics and Poverty.

February 2017 "Reframing Chronic Poverty and its Alleviation through the Insights and Strategies of Poor-led Movements." Talk, Dept. of Ethics, Social & Political Philosophy, University of Groningen, the Netherlands.

October 2016 "Reframing Chronic Poverty and its Alleviation through the Insights and Strategies of Poor-led Movements." Ethics & Public Affairs Program, and Dept. of Philosophy, Carleton Unviersity

May 2016 "Global Justice From Below? The Value of Poor-led Social Movements to Poverty Alleviation." Keynote talk, University of Salzburg Workshop on Philosophy and Poverty

Sept. 2015 "How Should the Political Movements of the Poor Figure in Theorizing About Global Justice?" Symposium on 'Global Justice: New Directions in Research and Advocacy,' Ghent, Belgium

May 2015 "Is the Cross-Border Trade in Human Eggs Wrongfully Exploitative?" Gender and Global Justice Conference, Centre for Global Ethics, University of Birmingham (UK)

June 2014  "Sexual Equality and Personal Autonomy: Possibilities of Pluralistic Interpretations."  Conference on '(Not) Outside My Culture: Paradoxes of Personal Autonomy in a Plural Society,' Max Plank Institute, Halle, Germany

Feb. 2014  "The Cross-Border Trade in Human Eggs: an Ethical Conundrum from the Perspective of Global Justice." Workshop on Global Surrogacy and Reproductive Markets, University of Ottawa

Nov. 2012  "Agents or Subjects of Global Justice?". Invited talk, McMaster University (Society for Philosophy and Culture & the Institute on Globalization and the Human Condition)

PHIL 6610 Black Political Thought in the Era of #BLM_readings only.pdf