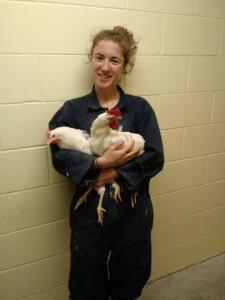 I completed my M.Sc. in Animal Science in France in 2015, majoring in Animal Production. Various internships allowed me to gain experience working on welfare and behaviour research projects on many animal species (goat, pig, rhesus macaque, sheep, broiler) and agricultural systems. Following my masters, I worked at the Technical Institute for Poultry in France for 16 months. I managed many European projects on laying hens’ and broilers’ health, welfare and behavior with a focus on feather pecking in non-beak-trimmed laying hens. Severe feather pecking behaviour (grasping, pulling and sometimes removal of feathers from a hen to another) has been a global problem for the laying hen industry for decades. It causes injury, cannibalism and even death in commercial flocks. In Europe, in order to reduce/prevent this behavior, laying hens are being beak-trimmed at a young age– which causes another welfare problem.

I decided to continue my work on feather pecking by joining Dr. Harlander’s team at the University of Guelph in May 2017 as a Ph.D. student. Previous studies on animals suggest a link between gut microbiota, social behaviors, and well-being. Feather pecking is triggered by a low serotonin (a metabolite of amino-acid Tryptophan, primarily found in the gastrointestinal tract) neurotransmission. My current on-going research is focusing on the possible link between specific microorganisms that live in the digestive tracts of birds expressing high or low levels of feather pecking behaviour. We know from a previous study that the genus Lactobacillus is less abundant in the ceca of High feather pecking birds compared to Low feather pecking birds. By supplementing half of birds with a pure strain of bacteria (belonging to Lactobacillus), for 9 weeks, we will look at the changes in gut physiology and behavior. Identifying microbes and microbial products to prevent feather pecking could lead to a partnership with the feed industry, to commercialize potential new probiotics and to benefit millions of laying hens.

In my free time, I like to travel and discover more of the world around me.