Professor Shoshanah Jacobs, her MSc student Joshua Cunningham, and some of their colleagues have published a study that hopes to show that the scale at which you conduct your experiment can really impact your findings.

In the study, they found a relationship between age and foraging behaviour in thick-billed murres (Uria lomvia), contradicting a previous study that had found no link. 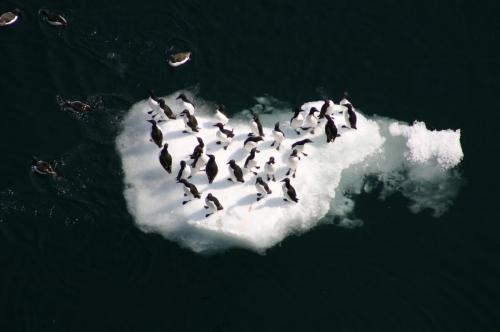 These murres are long-lived, diving seabirds that forage for food by diving underwater. They were chosen as the model organism because of their high energy allocation towards diving during their long life span; this colony has been followed extensively since 1981.

The research group was able to detect the relationship between age and foraging because they asked about the birds’ fine scale behavior – what happens on a single dive?

Miniaturized accelerometers were used to help answer their question. The devices were attached to the birds to measure dynamic acceleration in two-dimensions, the birds’ head-tail and front-back directions, the acceleration tells them about the birds’ energy expenditure while diving.

Three murre age groups were investigated: young (<10 years old), middle-aged (11-19 years old), and old (>20 years old). They predicted that there would be a non-linear relationship between foraging and age because of either: (1) activity peak hypothesis - middle-aged birds have more energy that can be used towards foraging  so acceleration would peak in middle age, and (2) inactivity peak hypothesis – middle-aged birds are simply more efficient and use less energy  during foraging, meaning their acceleration would be lowest in middle age. 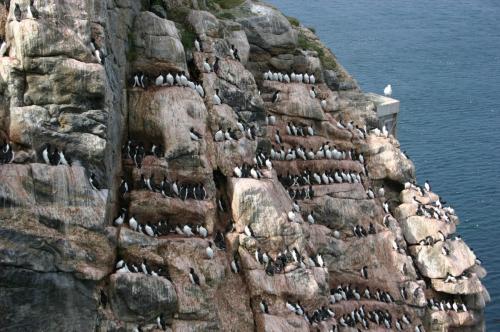 Their results showed evidence of a link between age and foraging. They discovered that acceleration was lowest in middle-aged birds, which supports their inactivity peak hypothesis, and they concluded that middle-aged birds used less energy per dive than younger and older birds.

Prof. Jacobs and her colleagues think that based on diving frequency, amplitude, and angle, the success of middle-aged birds can be attributed to two reasons: experience and physique.

Young birds lack experience, they use more wing beats than necessary and dive at suboptimal angles. Old birds on the other hand suffer from a declining physique. They used more energy to reach deep feeding depths and to ascent from those depths. However, experience may slightly counterbalance declined physique. Both these groups therefore use more energy and had high recorded accelerations.

Moving forward, they learned that the usage of accelerometers can be useful in understanding other fine-scale kinematics in behavior ecology, especially in the context of aging and most importantly, it enforced the age-old idea that you might just need to change your perspective (or scale) to find an answer to your question.