I am an ecosystem ecologist with broad interests in plant ecology, biogeochemistry, and global change.  We use a variety of approaches, from large-scale manipulations to laboratory experiments and paleoecological reconstructions, to understand the resilience of communities and ecosystems to environmental change. I am excited by integrative research questions that span levels of biological organization, particularly questions that explore the evolutionary, physiological, and ecological mechanisms underpinning ecosystem services 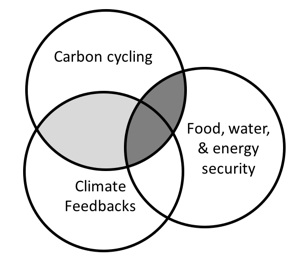 We work on a variety of research issues including permafrost degradation and changing wildfire regimes that are important to global change and environmental policy arenas. In both northern Canada and Alaska, my research is moving towards fundamental research questions that also are of interest to stakeholders in the north.  Northerners are experiencing the most rapid climate change on the planet, and our research is helping them to address what these rapid changes mean for their land, traditional foods and the quality of their water.  Landscape changes associated with climate warming also will influence the resilience of power and energy systems in northern regions. For example, we are studying how permafrost thaw is leading to land subsidence (thermokarst) and how this is affecting the ability of subsidence harvesters to travel across their land and access traditional foods.  By conducting user-driven research that also addresses fundamental questions in ecology and global change biology, we aim to build knowledge and capacity for northern communities and governments.

Several important research themes in my lab include:

The biology of biogeochemical cycling.

Plants and microbes have direct and indirect influences on ecosystem processes.  Plant-microbial interactions govern several important aspects of soil nutrient cycling. In northern regions, our research investigates changing community structure along disturbance gradients and how functional traits assemble to influence decomposition and exchange of carbon between the biosphere and the atmosphere. I am broadly interested in plant and microbial communities that thrive in permafrost and wetland systems and how they adapt to stressful environments (cold, wet soils).  Lastly, wetlands are particularly vulnerable to biological invasions due to their hydrologic function and I am interested in the role of invasive species on biogeochemical processes in the Great Lakes basin and other wetland-rich regions.

Climate change and disturbance in boreal and taiga regions.

In many regions, climate change has caused pronounced shifts in the frequency and severity of disturbances such as wildfire, permafrost degradation, and insect outbreaks. Fire has strong controls over carbon sequestration across boreal landscapes, and we are examining the influence of burning on aspects of water and air quality such as nitrogen and mercury cycling. While the short-term influence of fires includes these biogeochemical alterations, we also study how burning influences long-term ecosystem behavior through vegetation composition and by potentially triggering permafrost thaw.

I am interested in using a variety of scientific approaches - including descriptive studies, gradient studies, paleoecology, modeling, and experiments – to understand how ecosystems and ecosystem services are responding to changing climatic and disturbance regimes. More than 15 years ago, I initiated a series of water table drawdown and soil warming experiments in fens in interior Alaska (the APEX experiment), and we remain committed to using this experimental design to collect long term data. This work is affiliated with the Bonanza Creek LTER site.  We also are conducting research in Alaska and Canada following up on the immediate and long-term consequences of major fire seasons, such as the 2004 fires in Alaska and the 2014 fires in the Northwest Territories.

My northern research program is now posing a variety of research questions linking ecosystem services and carbon cycle science to water and food security.  Indigenous households experience far more food insecurity than other households, and this is intimately connected to water.  For example, we study how permafrost thaw affects water quality and the ability of subsistence harvesters to travel and access traditional foods. We are working with communities to identify how thermokarst is affecting culturally important lands.

Many models also show that northern Canada will become more suitable for certain crops under future climate change. This makes the north one of the most important agricultural frontiers.  Productivity on northern soils will require drainage, which causes large carbon emissions.  We are using a number of approaches to help build capacity in northern communities to better adjust to this shifting agricultural landscape and embrace climate-smart food production and agriculture.

Effective teaching and mentoring both in and out of the formal classroom are important components of my program. My goal as a teacher is to challenge students to think, to communicate, and to become life-long learners. I currently am teaching IBIO*6630 (Scientific Communications) and BIOL*2060 (Ecology).

Graduate students in my lab are expected to identify novel research hypotheses, develop approaches to testing these hypotheses, and take advantage of opportunities and research interests in the lab. My goals as a faculty advisor are to mentor students through the scientific process, to challenge students to achieve their academic potential and meet career goals, and to encourage a creative, interactive, and fun learning environment. If you are interested in joining our research team, please view our lab website for more information on how to apply.