U of G engineers use mathematical models to improve biofuel production, with large-scale impacts.

Shrinking glaciers, rising sea levels, and species extinctions—these are just some of the observable effects of climate change and the result of increased greenhouse gases in the atmosphere. Roughly two-thirds of the world’s greenhouse gas emissions are due to carbon dioxide produced from fossil fuel combustion and industrial processes. Biomass, organic matter produced from agricultural or forestry residues (e.g., corn husks or sawdust) is an abundant and renewable resource to produce liquid fuel. However, to produce these fuels on a large, industrial scale, the process is complex and costly.

University of Guelph engineering professor Dr. Animesh Dutta and his team, including former U of G PhD student Dr. Mohammad Heidari, have used mathematical modelling and experimentation to streamline biofuel production. A key challenge is the high moisture content in organic matter; that moisture must be removed. Dutta and his team explored a chemical process called hydrothermal carbonization (HTC). In HTC, the biomass is introduced into water and heated to between 180 and 260 degrees Celsius under pressure. During the process, biomass converts to a solid, which can be used to produce biofuel. How to efficiently implement hydrothermal carbonization at an industrial scale, however, has not been widely studied.

Dutta and the team developed a mathematical model that simulated the reactions and energy requirements to implement the HTC process at an industrial scale. The team experimented with HTC on pinewood particles produced from an Ontario tree farm. Pinewood is low-cost, renewable, and abundant in North America making it an ideal biomass source to explore. The researchers placed the biomass into a pressurized vessel where it underwent the HTC treatment. The team then compared the results of their experiments against their model. Their findings validated the model predictions, proving its potential in designing an industrial-scale reactor for hydrothermal conversion of biomass.

“Hydrothermal carbonization is an emerging technology for converting biomass to biocarbon that can potentially replace coal currently used in various industrial applications including electricity generation,” says Dutta. “Our model will streamline the production of biocarbon at an industrial scale and is a crucial first step in diversifying energy systems globally.” 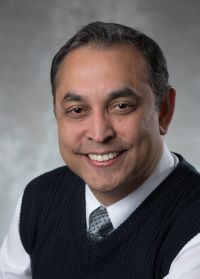 Animesh Dutta is a professor in the School of Engineering.

This work was supported by the Natural Sciences and Engineering Research Council of Canada (NSERC Grant no. 400495), Environment and Climate Change (MOECC) for Best in Science program (Project #053191). Financial support from the Biomass Canada Cluster (BMC) which is funded through Agriculture and Agri-Food Canada’s AgriScience program and industry partners is also acknowledged.