Since Albert Einstein, scientists have been fascinated by the gravitational waves that result from the collision of supermassive black holes—black holes that are billions of times more massive than the Sun. Like a ripple in space, gravitational waves travel at the speed of light, distorting any astrophysical objects that they pass along the way and allowing scientists to measure otherwise unseeable objects. Dr. Huan Yang, a professor in the Department of Physics, and colleagues are developing new equations that will help researchers take measurements of massive black holes and understand their interactions with other cosmic objects.

Out of this World Observations

To get a better “look” at gravitational waves, scientists have sent observatory buildings up to space. For example, the Laser Interferometer Space Antenna (LISA), consists of three spacecrafts that send laser beams back and forth in search of evidence of gravitational waves. Detectors such as LISA particularly target instances where a light cosmic object orbits around a much heavier object, such as when a black hole or a neutron star orbits a massive black hole. By assessing the formation of these interactions, it becomes possible to study previously invisible astronomical phenomena such as the death of stars and to make inferences about events like the Big Bang.

Modeling the interaction dynamics between cosmic objects is highly complex and the interaction between the orbiting objects and their astrophysical environments matters. Previous studies have assumed that the lighter orbiting objects are scattered into the vicinity of the central massive black hole, ignoring the possible interaction with accretion flows—disk-shaped flows of gas, plasma, dust, or particles surrounding astronomical objects—at galactic centers. Yang and his colleagues developed new mathematical models to account for the influence of accretion disks on orbital evolution around massive black holes. The team discovered that accretion disks dramatically changed the picture of how comic objects migrate towards galactic centers.

“Our new models can be used with existing models to examine gravitational wave observations gathered by wave detectors like LISA,” says Yang. “We expect that the detection and analysis of the interaction between orbiting cosmic objects will be critical for more-precisely using gravitational waves to examine astrophysical objects like black holes and neutron stars.” 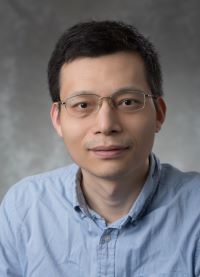 Huan Yang is an Assistant Professor in the Department of Physics.

This work was supported by the Natural Sciences and Engineering Research Council of Canada and in part by the Perimeter Institute for Theoretical Physics. Research at the Perimeter Institute is supported in part by the Government of Canada through the Department of Innovation, Science, and Economic Development Canada and by the Province of Ontario through the Ministry of Colleges and Universities.