A Holistic Approach to Clean Up Groundwater

Roughly 10 million Canadians rely on groundwater for drinking, farming, and manufacturing. Sadly, this important resource is under threat, with industrial and agricultural activities leading to pollution from toxic metals. For example, copper is often used in fertilizers, pesticide sprays, and building materials, and can leach into the groundwater.

Dr. Erica Pensini, an Associate Professor in the School of Engineering, has developed a novel approach to address copper contaminants in groundwater. Her method uses surfactants—chemical substances that enhance the separation of contaminants such as heavy metals from water.

Pensini and her collaborators sought to explore a particular kind of surfactant called sodium lauroyl lactylate. This surfactant binds copper ions in water and is safe for the environment. The team explored this surfactant’s ability to release copper from soil, to facilitate its removal from groundwater when used in conjunction with canola oil, and to help detect it in water samples.

The research team immersed copper-contaminated pea gravel and limestone in water and analyzed the copper levels in the water after 24 hours, verifying that sodium lauroyl lactylate effectively promoted the release of copper. When the team next examined the effects of the surfactant in water, they found that it enhanced the blue discoloration of water in the presence of copper. This outcome will allow field teams to quickly evaluate water contamination with the naked eye. Finally, the researchers found that the surfactant bound copper in the groundwater, facilitating its sorption by non-toxic liquid sorbents (e.g., canola oil droplets), to enable its removal from water.

“Our holistic approach solves multiple challenges: at once we can detect copper contamination with the naked eye, remove it from polluted soils, and use canola oil to remove it from water,” says Pensini. “In the next stage of this research, we will examine the effect of other contaminants that may be present in groundwater on the effectiveness in this method. We will also work to investigate using non-toxic oils as surfactants.” 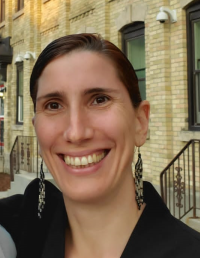 Erica Pensini is an Associate Professor in the School of Engineering.

This work was supported by the Natural Sciences and Engineering Research Council of Canada.