We chatted with Physics grad Evan Rand about his career and experiences post-graduation.

Evan Rand, a graduate from the University of Guelph’s B.Sc., M.Sc., and PhD programs in Physics, entered the workforce after graduation as an Applied Physicist for Canadian Nuclear Laboratories (CNL), one of Canada’s top nuclear research facilities, located in Chalk River. He has made significant contributions at CNL since then, and Evan says his graduate research at U of G directly connects to his work now.

Tell us about your work and your role.
I am an Applied Physicist within the Applied Physics Branch at CNL. My work has primarily been in nuclear safety and security with a focus on advancing radiation technologies for both border security and nuclear non-proliferation—preventing the spread and acquirement of illicit nuclear material.

Muons are like heavy electrons; They are naturally produced in our upper atmosphere and constantly rain down on us. They can easily penetrate very dense materials which make them useful as a probe in a variety of applications, including the detection of shielded special nuclear materials.

I have also contributed to the development of a prototype liquid argon detector to screen cargo containers at Canadian borders. This work leverages technology currently being employed to search for dark matter in our universe.

Outside of nuclear safety and security, I also work with a team of scientists studying the transient behaviour of nuclear reactors using CNL’s versatile, heavy-water moderated low-power research reactor. 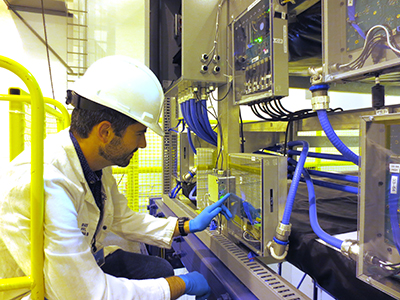 Tell us about a recent complex or interesting project you led.
I was the lead researcher in the development of a novel detection algorithm for muon tomography applications which doesn’t rely on traditional elements such as imaging.

In my field, developing new computational algorithms to generate 3D images using muons is popular. For some applications however, images are not necessary, or in fact, are considered a disadvantage. Instead, a fast assessment providing information on the presence or absence of high-density and high atomic number materials, such as special nuclear material, is needed.

Our paper below gives some of our experimental results and illustrates good discrimination for the setups we tested. We can detect the presence of high-density high-Z materials within just a few minutes whereas traditional image-based algorithms would take hours or more. That could mean the difference between detecting something or not, especially in the context of border security where time is of the essence.

Read Nonparametric Dense-Object Detection Algorithm for Applications of Cosmic-Ray Muon Tomography co-authored by Rand and team during this project.

What do you enjoy most about your work?
New challenges, new problems, new projects. Applied science at a place like CNL spawns a lot of cross pollination, which isn’t just interesting but a lot of fun as a scientist.

New perspectives with individuals with differing talents makes it possible to decompose a difficult problem into something more manageable. One of the most enjoyable parts of my job is a random email asking if I’ve ever encountered a problem like this, or could you measure this material with that detector, or what if we did this?

How did your education at U of G contribute to your career and journey after graduation?
As an undergrad I was exposed to nuclear physics as a co-op student working with Prof. Paul Garrett. Little did I know then I would work with the nuclear physics group at Guelph for many more years as an MSc and then as a PhD student.

During that first co-op I began learning Geant4, a computer software tool to study the interaction of particles with matter. I still use Geant4 today—it’s a powerful tool that enables me to make calculations and predictions before embarking on expensive measurements and lab work.

The hands-on laboratory experience I obtained at Guelph and at other collaborating labs (TRIUMF, TUM, etc.) has directly fed into my research. I use similar detectors and analysis methods I learned while at Guelph. I was incredibly fortunate to get a high-caliber training in both the hands-on experimental research as well as computational methods.

Tell us about us about your research while at U of G.
My MSc was on the search for a permanent electric dipole moment (EDM – a measure of the separation of electrical charges) in an atomic nucleus. If found, it would imply the existence of new physics outside the Standard Model—our theoretical framework to describe the building blocks of the universe. In my research we investigated how one could potentially make a measurement at TRIUMF using the GRIFFIN gamma-ray spectrometer (aptly named in honour of the Guelph Gryphons!).

In my PhD I continued this type of research, but from a different angle. Again motivated by EDMs, we performed nuclear structure measurements in an effort to make better predictions on the size of an EDM in mercury. These measurements used the Tandem accelerator and Q3D magnetic spectrograph at the Maier-Leibnitz Laboratory, in Garching, Germany. We made several discoveries related to my research.

The physics department was especially welcoming. The staff and professors were overwhelmingly friendly and approachable – if you had a question, you could simply go to their office. In most cases the door was already open. Moreover, as a grad student we had to travel a lot nationally and internationally to do much of the experimental work. Those years as a grad student travelling to different laboratories are some of my most cherished memories – we had a lot of fun doing a lot of interesting science!