Greening the roof over your head: A look inside a growing industry 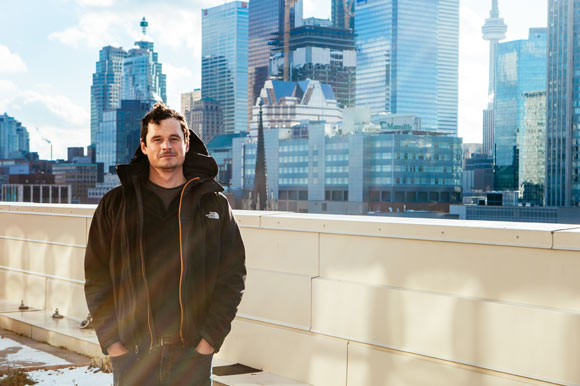 Seven years ago, Greg Yuristy was doing everything from home building to custom cabinetry.

“But I got tired of breathing drywall dust all day. So I went back to graduate school.”

There, he met Prof. Youbin Zheng, who is the lead of the Green Roof Research Program at the University of Guelph. For a plant biology undergrad like Yuristy, the program promised a blend of his chief interests – skilled trades and horticulture.

Now, Yuristy is onto something massive. He launched Smart Green Technologies Inc., and in business partnership with Tulloch Engineering and research support from the University of Guelph, has developed a system that he believes out-performs every other green roof on the market. And in eco-friendly Toronto, demand is growing – fast.

While other countries like Germany have been using green roofs since the 1980's, North America has been playing catch up. Toronto, however, is a city enamoured with renewable energy and sustainability. Ryerson's engineering building on Church St., the new Forensic Services and Coroner's Complex and Toronto City Hall are all notable examples of green roof early adopters.

A pioneer in North America, the city requires all new builds with a minimum gross floor area of 2,000m2 to include a portion of vegetation on roof surfaces. It also offers a grant of up to $75/square metre to offset the cost of green-roof installation. Similar incentive programs are being instated in Washington DC, NYC and Chicago, but Toronto is the first to actually mandate builders to include a vegetated roof – or face a hefty fine.

And with good reason. Green roofs divert waste, help manage storm water, moderate 'urban heat island' effects and improve air quality. They also reduce noise and can save significant amounts of money. In a warehouse complex, for example, the evaporation characteristics of a green roof can lower the inside temperature from between three to five degrees Celcius.

“If it's air-conditioned,” said Mike Tulloch, of Tulloch Engineering, “that's fairly sizeable in how much less the air conditioners have to run to keep the warehouse cool.” And that means the green roof system can quickly pay for itself.

The components of any green roof are waterproofing, root-proofing, a drainage layer, a filter layer, soil and then plant. They generally are installed using one of two methods: the tray system or the layer system. With a layer system, all the products come in large rolls. They roll them out on the roof, dump soil on top, rake to the appropriate depth and compact it. Then they populate it with plants, either using pre-vegetated blankets (kind of like sod) or with 'plug' plants. Alternately, the tray system involves producing a plastic box that is open at the top, filling it with soil and plants grown in a nursery, then hauling these pre-vegetated trays onto the roof for instant greening. “We saw some flaws in both of those systems,” explained Yuristy. “With the layered system its very awkward managing all of these different independent layers of the system; it's often out of the scope of a lot of roofers' skillsets. It's really difficult to use a rake on a roof and move soil around. Especially on sloped roofs.” As for the tray system, installation can be very labour-intensive.

SGT has developed a system that addresses those concerns, and has created a green roof that is extremely lightweight, easy-to-install and costs significantly less than tray or layer systems. And, rather than outsourcing to disparate sub-contractors, Smart Green Technology Inc. handles all aspects of the green roof life cycle - from greenhouse sedum cultivation to installation to wireless home monitoring. After a water-proof (and leak-proof) membrane is sprayed on and a root barrier is laid down, SGT's substrate blocks (each weighing 7 lbs.) are installed. “It's very easy to put them in place and each block mechanically adjoins with each adjacent block, so the final system is a single monolithic piece,” says Yuristy.

For the vegetation itself, SGT uses a method that was invented by Zheng's lab at the University of Guelph. It produces plants grown on mats (very similar to sod) with a couple of distinct differences. “For one, its incredibly lightweight,” says Yuristy. “It only weighs about half a pound to three-quarters of a pound per square foot.” These mats can be stored rolled up for up to a month.

“And because we are able to quickly produce loads of healthy plants that don't have soil,” adds Zheng, “These green roof plant mats can be easily and quickly shipped to anywhere in the world.” The plants are mostly sedum, a cactus-like succulent that is extremely hardy and adapted to the harsh conditions of a rooftop – whether it's direct sunlight or long dry spells (some can live without water for over 60 days). The mats are well suited to being easily rolled down steep inclines, or down vertical drops to form living walls.

But one of the oft-overlooked and more crucial aspects of green roof technology is maintenance after installation. Improperly-run irrigation systems (or no irrigation at all) can result in a lost investment. Zheng uses a houseplant analogy; if your potting substrate dries out and you try to water it, the liquid will just come out the bottom of the pot. Similarly, a too-dry green-roof will be unable to retain rainwater. And proper moisture levels are essential to aid in transpiration.

“A major principle of cooling the building is evapotranspiration, or transpiring water from the plants and evaporating from the substrates and plants,” says Zheng. “So if your plants don't transpire (lose water to the air), your building’s cooling efficiency will not be that great.”

To optimize irrigation, SGT will use small sensors which they embed throughout the roof. These sensors monitor temperature, moisture levels and surface humidity levels.

“That will allow us to irrigate where we need to irrigate at the exact time we need to, based on the real-time data we're getting in,” explains Yuristy. “It gives us a level of monitoring so we can be ensuring the roof is performing as we intended.”

Because SGT handles each aspect of production and installation (from their Greenhouse in Prince Edward County to their substrate block building facility), they are able to offer a more competitive price (under $25 per sq. ft.). That's what we think will set us apart,” says Tulloch.“There's only two or three companies that do it in Canada, and maybe a half dozen in the states. So it's a wide open market.”

“We had a desire to make the vegetated roof accessible, so that it was possible from an engineering perspective, and economically an option.” For Yuristy, it's now about simply spreading the word. “These are amazing projects that we want to get out there. We have acres of plants that we want to put on roofs. It's about convincing people, particularly architects, that we are very knowledgeable about all aspects of the system.”