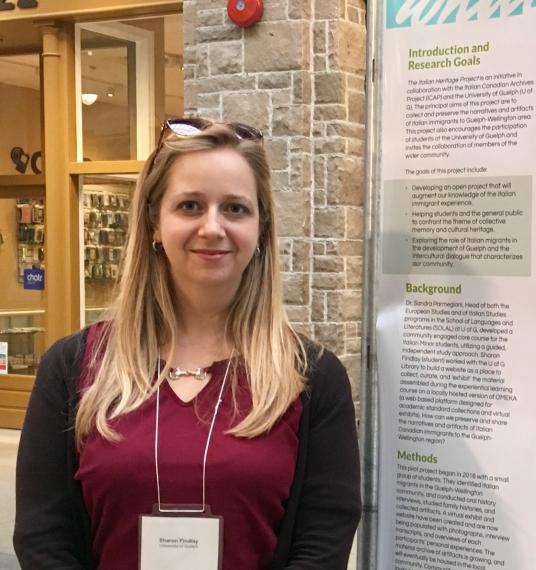 Sharon recently finished her degree in European Studies. She was engaged in applied research, community engaged learning courses and did a practicum in Europe. Additionally, Sharon also worked on campus as a student staff.

A recent graduate of the European Studies program, Sharon was deeply involved in experiential learning through her program. She started her degree as a Sociology major then switched to European Studies. "I liked the program because it gave me the opportunity to study society through artistic expressions and languages," she shared. Through the program's experiential course offerings, Sharon had the opportunity to do a theatre practicum in Europe, and be involved in the Italian Heritage Program.

"They gave me the opportunity to apply my learning to the community and see the positive impact that I was making."

Sharon conducted research for the Italian Heritage Program with a faculty advisor, and through the experience, developed many skills. She learned how to work in the community, curate stories and collaborate on a large project with multiple people, which made the experience worth her time. She also published a scholarly article and was able to establish herself as a scholar, while developing professional skills. Speaking of her EL experience, she says "They gave me the opportunity to apply my learning to the community and see the positive impact that I was making". Sharon connected with the Italian community and built personal and professional relationships that can help with her future career.

"I have been exposed to a new direction for a career after graduation that I did not originally foresee when I started."

Sharon was interested in the study of memory and cultural integration. Through her involvement in EL, she was able to further narrow down the direction she wanted to continue her studies in. She says, "I have also been exposed to a new direction for a career after graduation that I did not originally foresee when I started". Two years after her initial work with the Italian Heritage Program, Sharon was still contributing to the project in different ways. Sharon was also able to make connections with other institutions that were working on similar projects. EL was a valuable opportunity for Sharon to be able to apply her classroom learning to the real world.

While the research Sharon was engaged in was very rewarding for her, it also required her to develop time management skills as the learning was self-directed and quite independent. Sharon had to make EL a priority because for her, it was a way of propelling herself into her future career and making a difference in the community. She is now pursuing a Master of Arts degree, guided by her interests and involvement in EL.