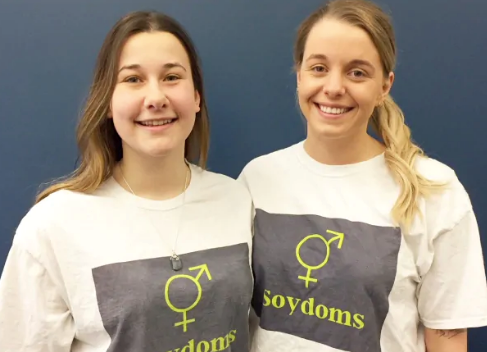 Soydoms is a winning project from the 2018 Project SOY competition, created by 4th year students Chloe Quillam and Ashley Rutherford.

The 2018 annual Project SOY’s undergraduate category prize winner was Soydoms, a soy-based condom created by Ashley Rutherford and Chloe Quillam. Both Ashley and Chloe are in their fourth year, majoring in Animal Sciences and minoring in Nutrition and Nutraceutical Sciences. Project SOY is an annual competition at the University of Guelph that aims to find new innovative uses for soy to provide alternative markets for soybean usage.

“We wanted to make an eco-friendly condom for consumers that was safe and effective,” shares Chloe.

Both having been previous participants in Project SOY, Chloe and Ashley decided to join the competition one last time, aiming to win first place. What started off as a joke between the two friends, quickly became a serious idea for their project. “We wanted to make an eco-friendly condom for consumers that was safe and effective,” shares Chloe. Based on what they learned in their nutrition classes about natural products, they began trials for their Soydoms recipe.

After winning project SOY, Chloe and Ashley wanted to continue their work on Soydoms and pitched to the Hub Incubator. After their pitch was accepted, Chloe and Ashley went through a semester of entrepreneur training during which they further explored the consumer market, engaged in customer discovery and business development for Soydoms. Coming from an Animal Science background, both Chloe and Ashley found the knowledge and support from the Hub incredibly helpful in understanding the business operations side of their endeavour. "We met other entrepreneurs and were able to make a community...we met people that were interested in what we were doing," they shared.

Outside of Soydoms, Chloe and Ashley both have plenty of experiential engagement keeping them busy. Chloe is the project SOY coordinator for the 2018/19 academic year, which takes up a lot of her time outside the classroom. She also works part-time at a veterinary clinic. Ashley is an executive member of the Animal Science Society and is conducting research at the Ontario Veterinary College through her Work Study job on campus. Now being students who are involved both inside and outside the classroom, and entrepreneurs, they share that they have to create a schedule and stick to it if they want to accomplish all their goals. Their experiences have taught them responsibility and helped them gain confidence in their abilities and skills.

Ashley and Chloe are very conscious of how important it is to get their product just right, and continue their research on perfecting Soydoms before they decide to launch it into the market.