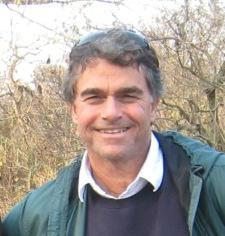 One of the fundamental questions in plant biology concerns the nature of the signals that bring about the transition from vegetative to reproductive growth. My research is aimed at characterizing the developmental signals that cause plants to flower. The primary focus of this work is the maize indeterminate gene (id1). Maize plants that lack id1 function flower extremely late, or not at all, and they exhibit abnormal flower development. The ID1 protein contains zinc-finger motifs, suggesting that it regulates the expression of other genes. Expression analysis reveals that id1 mRNA is expressed only in leaf tissue, suggesting that ID1 acts by controlling the production of leaf-derived signals that mediate the transition to flowering. Molecular, genetic and biochemical approaches are being used to identify the targets of the id1 gene. We are also using cDNA microarrays to generate a molecular profile of the differences between leaves that transmit flowering signals from mutant leaves that are defective in this function.

Other projects in the lab center on using genomics technology to identify and characterize genes that control flowering time, as well as cell division genes that are important for growth and development in maize and other plants.