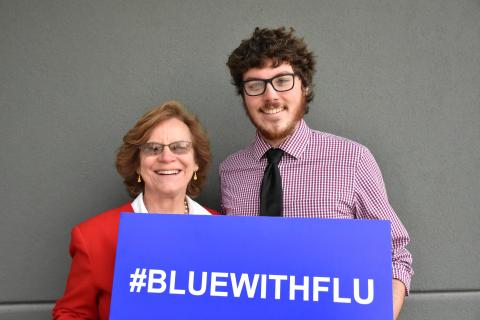 Hash-tagging your flu-season blues could help track other disease outbreaks, especially among millennials, says a University of Guelph researcher.

Adam Beswick, a MSc. student in epidemiology in the Ontario Veterinary College's Department of Population Medicine, says that when millennials get sick, their first reaction may be to Tweet about it rather than go see  a doctor, where flu cases care normally recorded and reported.

As a result, there may be valuable information to be gained by exploring online platforms for disease surveillance for this tech-savvy age group. So Beswick is looking to social media to track disease outbreaks.

“Social media is being used everywhere – from tracking natural disasters to social trends – so it’s only a natural step for it to be used in public health research,” says Beswick. “Canadians are among the highest social media users in the world. We’re very well connected online.”

Disease surveillance is crucial for public health organizations to track the spread of infectious diseases and effectively recommend preventative measures.

Beswick is focusing his pilot project on human influenza, because so many people have experienced the flu. It’s a hot discussion topic on Twitter.

He says Twitter is an excellent channel for obtaining data because a large percentage of the approximately 500 million tweets posted every day are publicly available. This activity has allowed Beswick to collect a dataset of 400,000 unique tweets from every province and territory in Canada, posted between August 2013 and July 2014.

Tweets were selected based on having one or more of 17 specific keywords pertaining to the flu, such as “flu”, “influenza”, “cough”, “fever”, “vaccine” and “H1N1”.

Part of the tracking involved confirming that keywords are used in the right context.  For example, there was an unexpected spike in the use of “fever” during the summer months. But taking a closer look revealed that most of these tweets were discussing unrelated topics such as “Bieber fever” or “Cabin fever”.

Analysis of the tweets revealed that there was a large spike in the use of influenza-related keywords in December and January. This mirrors the typical spike of influenza cases in the winter months.

In addition, there was an increase in the use of the term “flu shot” in tweets posted in October – when many people receive flu shots – and again in January, when some may regret not getting their flu shot.

Beswick says the correlation between the use of flu-related keywords and actual spikes in flu cases suggests that this method of using social media as a disease surveillance tool is effective, and could be used to track outbreaks of the flu and other diseases.

Tracking self-reported health information using the internet could also fill gaps in disease surveillance among a variety of populations across the world. Information about disease can be obtained from social media,  especially  in locations where typical disease surveillance structure is not present. For example, Beswick says that cell phone and social media use is widespread in developing countries; in the continent of Africa, for example, cell phone use exceeds 80 per cent of the population.

“This type of research is something that I think will be emerging in the next few decades, because of the ubiquity of internet usage, social media and cellphone usage.” says Beswick.