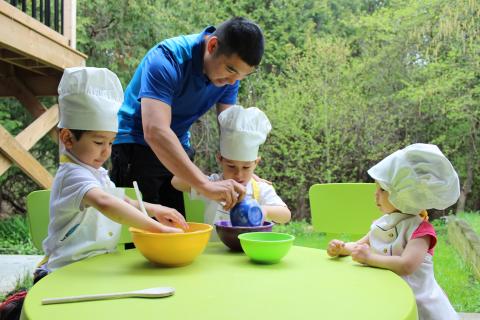 University of Guelph researchers from a wide range of disciplines are immersed in one of the longest-term studies ever undertaken by the institution – the 20-year Guelph Family Health Study. It’s designed to help families improve their health through better food, activity, leisure and sleep, with the ultimate goal of decreasing chronic disease risk, now and in the future.

The team is working with over 300 Guelph area families, and hoping to recruit more, to track lifestyle habits, body composition and genetics. The study takes a future-focused approach – the intent is to follow these families for several decades to give insight into how disease develops.

“We’re trying to understand the whole story,” says human health and nutritional sciences Prof. David Ma, study co-director, “from childhood to adulthood, and all of the factors involved in health.”

In addition to the main project, there are numerous student research studies being completed as part of the GFHS from the data collected. Currently, there are multiple ongoing projects on hot topics like food waste in Canadian households, the use of screen time in parenting practices and the genetics of taste.

This summer the GFHS passed its first five-year milestone. Ma, co-director Prof. Jess Haines, Family Relations and Applied Nutrition, and their team cite five major accomplishments since they launched the program in 2014.

​​2. Where kids get calories. One-third of children’s daily calories come from snacking, and snacks are often too sugary.

4. Parents matter to kids’ screen time. Media parenting practices and parental device use affect children’s screen time – and usually not in the way they intend them to.

5. Genes can influence your food choices. Taste preferences are genetically linked, and these preferences affect dietary intake and disease risk in both children and parents.

Co-director Ma sees potential for the study to give insight into other diseases, such as the effect of diet on the development of breast cancer in women, a subject in which he is immersed as a researcher.

“We aim to be a landmark study for health promotion and prevention research in Canada and beyond,” he says.

Currently, the study is recruiting 100 more families as organizers continue to expand its research capabilities. If you have at least one child between the ages of 18 months and six years and are interested in how you can take part in the study, contact study coordinator Angela Annis at aannis@uoguelph.ca or follow the link to the registration page.

The GFHS study was launched through funding from the U of G’s Better Planet Project and a philanthropic donation from Bob and Gail Farquharson. Now, GFHS is funded by 11 different organizations and foundations, both governmental and non-governmental, who are recognized on the GFHS website.

Among the researchers who have contributed significantly to the first five years of the GFHS are  Profs. Emma Allen-Vercoe, Andrea Buchholz, Gerarda Darlington, Alison Duncan, Paula Brauer, Lori Ann Vallis and Genevieve Newton, Lawrence Spriet and David Mutch as well as numerous staff and students. Special recognition to Dr. Michael Emes, former Dean of CBS and Jonathan Guss, Chair of the Health for Life External Advisory Board, for their leadership in the launch of the GFHS.

The GFHS also receives feedback from its Family Council, a team of parents from participating families that offer observations and suggestions to keep the study relevant and worthwhile for all the families involved.