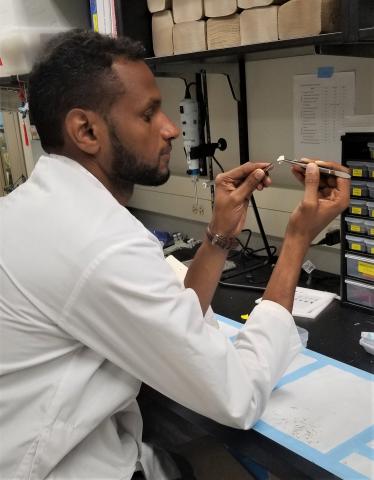 Connections within your brain help to shape who you are. Deterioration of these connections affects your memories and cognitive abilities, which is what happens with Alzheimer’s disease.

Despite how debilitating and emotionally devastating Alzheimer’s is, treatments remain ineffective to halt or slow disease progression. That’s why University of Guelph researchers are investigating new molecular targets to address this common disorder.

Prof. Melissa Perreault, Department of Molecular and Cellular Biology, is working to understand what causes Alzheimer’s disease. She hopes to uncover a new target of treatment by examining the connection between abnormal brainwaves and elevated activity of glycogen synthase kinase 3 (GSK-3), a protein responsible for inducing the production of neurofibrillary tangles in brain, protein deposits that are one of the hallmarks of Alzheimer’s disease.

Alzheimer’s Disease is complex, with multiple pathogenic processes ongoing that work to advance disease progression. GSK-3 plays a central role in many of these processes, but she believes combination therapies that target multiple pathways are required. Unfortunately, GSK-3 has numerous targets in brain, therefore focusing on GSK-3 inhibition directly may not necessarily be the best solution due to side effect risk.

“If you don’t understand the problem, you can’t fix it,” says Perreault. “Once we discern how GSK-3 affects brainwaves, it could open up opportunities for research into new treatment targets. Cognitive decline often precedes the development of protein deposits in Alzheimer’s Disease suggesting GSK-3 may be upregulated early in the disease process”

Even though these issues are present in every Alzheimer’s patient, there has been little research on evaluating whether there is a direct connection between abnormal neural oscillations and increased GSK-3 activity. That is, until Perreault and her team tackled the subject.

To begin to uncover the potential connection between GSK-3 and dysregulated brainwaves, the researchers worked with rats to test their learning capabilities as they ran through various learning and memory tests. They found that rats that received GSK-3 inhibitors showed altered brainwave patterns that were associated with improved learning and memory. Similarly, ongoing work by her PhD candidate Abdalla Albeely has shown the opposite, that increasing GSK-3 activity directly in the prefrontal cortex or hippocampus disrupted brainwaves leading to learning and memory deficiencies.

These results suggest that there is a direct connection between increased GSK-3 activity and hindered brainwaves that decrease communication between the hippocampus and prefrontal cortex. Perreault’s future research aims to uncover the mechanism behind this relationship.

Perreault hopes that her studies will contribute to the development of a new pharmacological strategy for targeting GSK-3 in a more focused manner. Finding a mechanism to suppress GSK-3 selectively in affected regions, in combination with targeting other substrates, may potentially provide an escape from this seemingly untreatable disease.

This research was initiated by Perreault and was funded by the W. Garfield Weston Foundation.