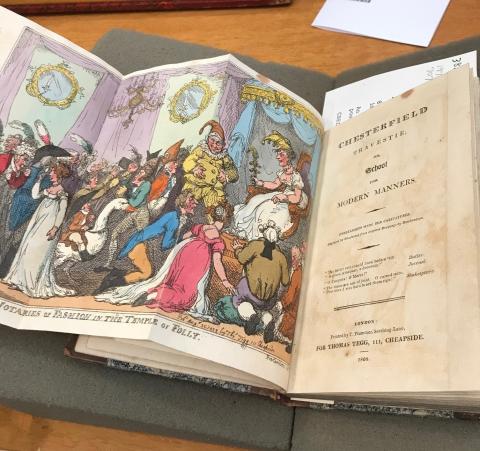 Uncovering the influence of a controversial publisher

What can a publisher of cheap satirical prints in England in the early 19th century teach us about the relationship between art and commerce and how graphic satire influenced early modern aesthetics?

This is what Prof. Christina Smylitopoulos of the School of Fine Arts and Music is looking to uncover with her investigation into the life work of publisher Thomas Tegg (1776-1845). A figure often dismissed by art historians because of his business-driven role in the world of publishing, Smylitopoulos hopes to illuminate his contributions to both the art and publishing worlds.

Tegg is best known as a reprint publisher, but he also traded in satirical prints. These consisted of humorous scenes and caricatures of well-known figures in various socio-political situations. At the time these were usually large-scale prints commissioned for the upper classes, but Tegg defied these norms by producing smaller, cheaper works, and greatly profited from these design interventions.

“Thomas Tegg’s publications have an unacknowledged realm of influence,” says Smylitopoulos. “He played a big role in making graphic satire more accessible to other classes and in driving the shift from these works being stand-alone commodities to works that would appear in other venues including books and magazines.”

While many dismiss him because of his cutthroat business tactics and an unapologetically economical approach to the production of the prints--including buying out old prints from competitors to sell them at lower prices and reprinting popular prints from worn-out plates—Tegg displayed significant business acumen.

According to Smylitopoulos, his publishing strategies are noteworthy. These include publishing the same print in multiple formats, and reissuing and repackaging prints over time in order to maximize profit. For example, a print could have been published on its own, only to be revived as part of a volume of prints, to illustrate a serial publication, and then finally to appear as part of a book.

His ability to keep his shop above water, even while many of his counterparts went bankrupt, allowed many famous artists to work for him and proliferate their works to a larger audience. He worked frequently with George Cruikshank, an artist who later became a key illustrator in the Victorian period for authors like Charles Dickens, for whom he illustrated Sketches by Boz (1836), The Mudfog Papers (1837–38) and Oliver Twist (1838).

“We can’t distance this material from the market,” says Smylitopoulos. “So why not study commodities from a successful publisher?”

Tegg’s business model may also have been one of the driving forces behind the rise of the political cartoon. With his prints being significantly cheaper and often smaller in scale than others, they had the opportunity to reach a much larger audience than those of his competitors. This invited a wider range of subjects which would appeal to the average person, including current affairs affecting the middling classes.

“His publications were the precursor to the political cartoon that you find in newspapers and other publications today,” says Smylitopoulos. “Thomas Tegg is one of the figures that changed the emphasis from an elite practice to something that can be understood and enjoyed by a larger group of people.”

As part of the project, Smylitopoulos is assembling a database of all of Tegg’s works. She will also be looking for correspondence between Tegg and artists he collaborated with, along with other documents that demonstrate Tegg’s business collaborations with other publishers hoping to find unacknowledged chains of influence.

“We have over 300 publications catalogued and over 1000 prints being linked to these larger publications,” says Smylitopoulos. “Putting everything together into one database means we can conduct comparative analysis and track the links between works.”

The collection and findings will be published online using OMEKA, a digital humanities tool that allows researchers to organize diverse objects to create a digital exhibition. This will provide art and publishing historians with a place to start their research on Tegg and make some connections between his publications and the work of other artists.

Collaborators on this project include graduate students Emily Cadger, Kimberly McDiarmid and Desirée Scholtz who have been able to conduct primary research and analysis on prints from the period and also learn to use digital tools to help them organize the material in a useful way.

Funding for this research is provided by an Insight Development Grant from the Social Sciences and Humanities Research Council and research fellowships from the Huntington Library (San Marino, CA, USA) and the Lewis Walpole Library (Farmington, CT, USA).  Smylitopoulos aims to publish a book on Tegg’s interventions in the trade in 2020.