Looking at Community Health Through a More Holistic Lens 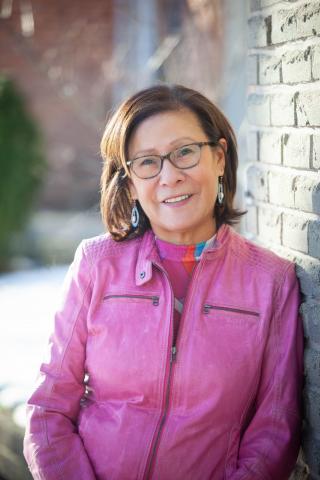 Dr. Diana Lewis, a professor in the College of Social and Applied Human Sciences, is leading the project, which commenced in early June 2022 and extends her master’s and PhD research. She and a team of transdisciplinary researchers will work directly with Indigenous communities to evaluate environmental, wildlife and human health issues using Indigenous relational worldviews -- a concept that acknowledges the interconnection between environmental, human and animal health and the widespread consequences of detrimental crises such as pollution – and western science.

“Western knowledge systems set the basis for many current policies, risk assessments and environmental monitoring systems,” says Lewis. “They often fail to account for Indigenous ways of knowing, being and doing.”

Immediately after the pulp mill opened in the 1960s, the Mi’kmaw community of Pictou Landing First Nation in Nova Scotia saw environmental, wildlife and human health effects. While the community knew ecosystem health was in jeopardy, studies conducted on the potential impacts found no health risk from the effluent.

Lewis began her research with Pictou Landing First Nation in 2010. Community members still had concerns about effluent pollution and raised these concerns to her.

While working on her PhD degree at Dalhousie University, Lewis studied the environmental and health impacts on members of the community.

"Community Elders told me their traumatic recollection of fish swimming to the surface of the water, gasping for air, just after the pulp mill was established and the effluent started to flow," says Lewis. "Community members were discouraged by the lack of control they had in the matter, even though an environmental health monitoring committee had been mandated by the federal government to oversee the impacts of the mill."

Indigenous communities, including Pictou Landing First Nation, base their way of life on relational worldviews, says Lewis. Indigenous peoples recognize the interconnectedness of ecosystem, animal and human health. The relational worldview recognizes that human activities, such as pollution from industrial development, have widespread impacts, including biodiversity loss and increased respiratory illness for humans and wildlife.

She collected health data in the community and compared human health records, including cancer records, between the Mi'kmaw, other First Nations, and non-indigenous populations.

Results revealed stark differences between community health data and a significant increase in adverse human health effects, including higher cancer rates in Pictou Landing First Nation, which standardized government environmental risk assessment methodologies failed to detect. Further, with the guidance of the Knowledge Holders in the community, she was able to develop a cultural framework to understand the significance of the fish story to explain how the Mi’kmaw relational worldview has been impacted.

Lewis’s current research is an expansion of her project with Mi'kmaw peoples living in Pictou. She is seeking input from other Indigenous communities across Canada, including, Cree, Chipewyan, Métis and Haudenosaunee peoples, about health concerns in their community.

By collaborating with Indigenous communities and recognizing their adversities, Lewis hopes these connections will support the development of appropriate health risk assessment approaches formed around relational worldviews. She aims to integrate Indigenous and Western ways of knowing for future health risk and environmental assessment policy development.

"While we are working towards more inclusionary policies and risk-based assessments that recognize community health from a holistic lens, updating assessment methods can benefit all communities, not just Indigenous communities," says Lewis. "Relational worldview is crucial for environmental sustainability and those that live here."

Lewis wants to add more research collaborators as well as Indigenous and non-Indigenous student researchers to her team, both undergraduate and graduate. She is particularly interested in collaborating with students specializing in environmental science, math and statistics and Indigenous research methodologies, and seeks additional research collaborations with faculty from various disciplines who are passionate about working with Indigenous communities.

This project is funded by the Canadian Institutes of Health Research (CIHR)- Institute of Indigenous Peoples' Health Project Grant and the Canada Research Chairs Program.