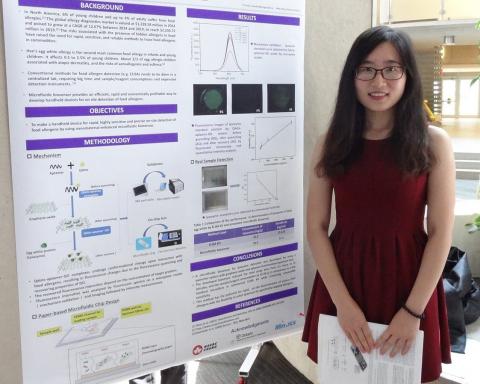 This story was provided by Mitacs

Although the general population is aware of the health risks posed by food allergies, these risks are still a safety concern for the individuals affected. With no surefire method of detection, people with serious food allergies must avoid certain foods altogether; however, a project at the University of Guelph is increasing food safety by helping to detect allergens well before an item ends up on consumers’ plates.

Kaidi Wang, a food science student at Zhejiang University in China, has travelled to Guelph this summer for a Globalink Research Internship that paired her with Dr. Suresh Neethirajan’s BioNano Laboratory. Kaidi’s internship has her working on a hand-held sensor that can detect common allergens such as brevetoxin and okadaic acid (from shellfish) and lysozymes (from egg) in food samples.

“Food allergies have a significant effect on people’s health — and medical visits and treatments can be expensive,” Kaidi explains. “Previous methods to detect allergens were time-consuming and costly, while this method will provide easier, more affordable, and field-deployable detection.” Kaidi anticipates that the sensor will eventually be commercialized and used by consumers.

The opportunity to come to Canada — which she learned about from classmates in China — has inspired Kaidi’s future plans: “I’d like to do a master’s degree and eventually a PhD abroad. I hope that I can return to Canada to continue my studies.” With Dr. Neethirajan’s support, Kaidi has broadened her research skills and even learn how to make a microfluidic biosensor chip.

Research isn’t the only highlight of Kaidi’s trip: she’s been exploring the city with her new friends and even took a trip to Niagara Falls. “I enjoy being in Guelph,” she raves. “It’s so beautiful and peaceful.”

You can read more about this research on the Mitacs website.