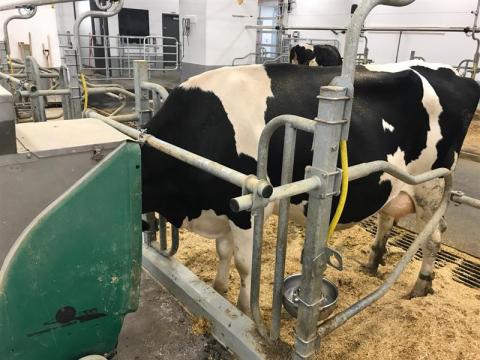 A dairy cow using a GreenFeed machine to have her emissions tracked while eating.

University of Guelph researchers co-led global efforts to establish a database intended to save money for the dairy industry, while reducing greenhouse gas emissions.

Researchers in Canada and abroad were involved in this project and helped to create a database to improve the dairy industry.

“Feed is the largest cost for dairy farmers,” says Schenkel. Referring to maintaining or increasing production with less feed, he said, “Improving feed efficiency of dairy cows will reduce feed costs for the dairy farmers.”

Many Canadian and international researchers collaborated on the database, which contains individually recorded traits of dairy cows, such as their individual methane emissions, milk output and how much they eat. This information allows farmers to select cows that are more environmentally friendly.

By having animals produce less methane and more milk with less feed, the Canadian dairy industry will save an estimated $108 million per year and decrease methane emissions by 11-26 per cent.

Some of the data for this project was collected at the Ontario Dairy Research Centre by student volunteers using a GreenFeed machine that tracks the cows’ methane emissions as they eat.

“The information in this database is already being used by Canadian dairy breeders to select for more feed efficient cows and will be able to directly select for lower-emitting cows starting early next year,” says Schenkel.

Now, the Resilient Dairy Genome Project, co-led by Christine Baes in the Department of Animal Biosciences, will continue expanding the database. This project will also use genomic approaches to improve dairy cattle emissions and enhance the sustainability of the Canadian dairy industry.

The EDGP was a Canadian-led project with international and national funding and researchers from Ontario, Alberta, Australia, Denmark, Switzerland, the United Kingdom, and the United States.

This project began in 2015 with $10.3 million in funding from Canadian funders, which included Genome Canada through the Large-Scale Applied Research Project competition, Genome Alberta, the Alberta Livestock and Meat Agency, the Ontario Ministry of Research and Innovation, the Canadian Dairy Network and Growsafe Alberta (now Vytelle).

The Ontario Dairy Research Centre is owned by the Government of Ontario through its agency, the Agricultural Research Institute of Ontario, and managed by the University of Guelph through the Ontario Agri-Food Innovation Alliance.