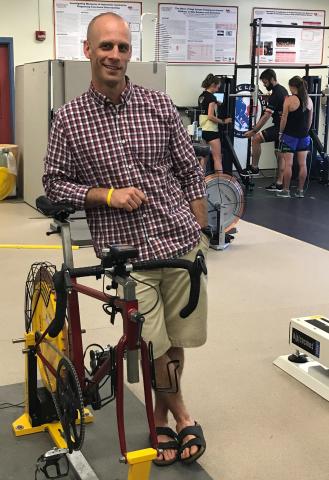 The human body adapts in response to stress, which is why exercising causes changes to our physique. But the idea that heavy weightlifting is required to increase muscle mass may soon be history, thanks to new U of G research.

Prof. Jamie Burr and his team at the Human Performance and Health Research Lab are experimenting with blood flow restriction (BFR) as a means of increasing muscle size and strength – and are succeeding in doing so. They’ve found the results of BFR versus heavy weights are almost the same.

Burr says this work has the potential to help an array of people, such as injury sufferers, elite athletes and even astronauts.

“We’re pushing the boundaries between what we know about the body and what’s humanly possible,” says Burr. 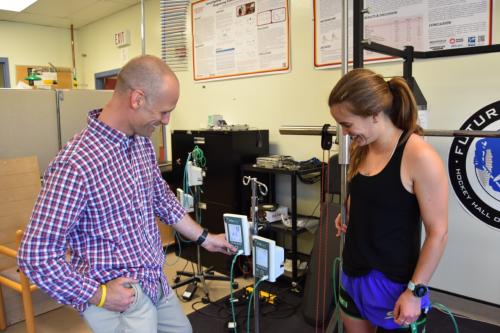 BFR uses tourniquets -- tools that cut off blood flow – to restrict flow to muscle groups, before having participants exercise those muscles with relatively light weights, or sometimes even no weights at all. Participants then take their exercise to failure – that is, to complete as many repetitions as they are physically capable of.

The researchers have found that after a period of training, blood flow-restricted muscles fatigue more slowly, so participants can sustain high exercise intensities for longer. That can be an advantage in certain sports, or even to accomplish tasks of daily living.

Burr predicts BFR will have many useful health and performance applications once the method is perfected.

For example, in rehabilitation, BFR would allow people with both acute and chronic injuries to regain strength and functionality before they are able to lift heavier weights, accelerating the recovery process.

In terms of improving athletic performance, Burr says BFR could serve to be the icing on the cake in athletes who have exhausted all other training methods, bringing a new meaning to the term “elite.”

Uses could also extend to extraterrestrial settings where gravity renders weightlifting useless. In that way, BFR could help astronauts prevent muscular atrophy, the wasting away of muscle that occurs in zero gravity when there is no physical demand to support the body.

The next steps of Burr’s research include optimizing the methods behind BFR, such as the amount of pressure placed on the exercising limb, and the type of exercise being performed. They also seek to understand the mechanisms responsible for the exaggerated training effects they are observing.

The Human Performance Lab is supported through a discovery grant from the Natural Sciences and Engineering Research Council, as well as an Early Researcher Award from the Ontario Ministry of Research, Innovation and Science. Equipment was supplied through funding from the Canada Foundation for Innovation, and partnership with Delfi Medical Innovations.

Prof. Graham Holloway of the Department of HHNS at U of G collaborated on this research.