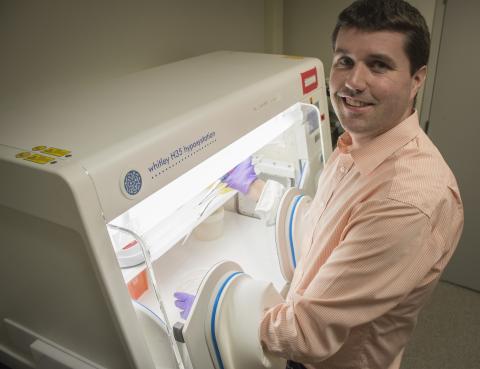 A new, non-toxic treatment applicable to a broad range of cancers may change the way we look at cancer therapy, says a University of Guelph researcher.

Prof. Jim Uniacke, Department of Molecular and Cellular Biology, is studying tumour hypoxia, a condition where a tumour cell has been deprived of oxygen.

It’s found in individuals with diseases such as cancer or heart disease. As the hypoxic tumours grow, they deplete the available blood supply around them, leading to a lack of oxygen.

This physiology of tumour hypoxia has troubled cancer therapists for decades. Hypoxic cells do not divide as much as cancer cells, making it problematic for traditional chemotherapy, which targets multiplying cells. Intravenous delivery (IV) treatment is also ineffective on hypoxic tumours, because it relies on blood transport, which fails to reach the hypoxic areas.

But Uniacke may have a solution.

Using his knowledge of the adaptive mechanisms of hypoxic cells, and recent research combining gene therapy and liposomes (artificially prepared spherical vehicles that are used to deliver cargo to cells), Uniacke has developed a new method of treating cancer cells.

He has turned the machinery of a cancer cell against itself so that it synthesizes a protein that only kills hypoxic cells, leaving normal oxygenated cells alone.

While Uniacke’s research concentrates on a panel of model cancer cell lines such as colon, breast and brain, his method of selectively targeting hypoxic tumours from normal oxygenated cells offers an attractive alternative treatment to doctors.

“Cancer is very complicated, but most cancers also have similarities—and that is tumours,” says Uniacke. “One of the key characteristics of tumours is hypoxia. It may be a way to treat all cancers equally instead of thinking of cancers as all different.”

A part of Uniacke’s method of selective expression relies on “suicide” mRNAs which target hypoxic tumour regions. Suicide mRNAs are genetically engineered templates synthesized from a strand of DNA, which kill the cells surrounding them due to the protein it creates. The suicide mRNA that Uniacke used is one standardly used in experimentation: herpes virus simplex 1-thymidine kinase (hSV1tk). Uniacke enclosed hSV1tk in a liposome to test it in hypoxic single layer cell cultures, modifying the suicide gene so that it is only expressed in a hypoxic environment.

Uniacke made the cells experience a hypoxic environment by placing them into a hypoxic chamber— a machine that mimics the deoxygenated environment inside a tumour cell. By putting the cell cultures into the chamber, Uniacke is able to see if the mRNA’s production of the suicide protein can be delayed until it reaches hypoxic regions.

“Selective expression has been lacking in gene therapy and this strategy would bring it to a whole new level,” says Uniacke. “That’s the novelty here.”

In the next step of his research, Uniacke will use mouse models to investigate the effectiveness of the treatment in naturally developed tumours.

Funding for this research is provided by the Canadian Cancer Society Research Institute’s Innovation Grant.