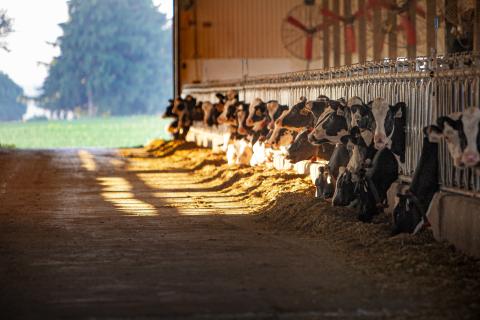 Low blood calcium levels after calving are an issue in dairy herds, especially in older cows, from their third lactation on.

Some producers take a reactive approach by giving cows calcium supplements after calving. But a study by University of Guelph researchers points to the benefits of a more proactive, preventative approach.

University of Guelph Prof. Stephen LeBlanc and DVSc student Rita Couto Serrenho, Department of Population Medicine, are the first to test the effects of a nutritional supplement— called a negative dietary cation-anion difference supplement (DCAD)—in a large-scale randomized controlled trial on commercial dairy farms. Cations are positively charged ions such as sodium and potassium; anions are negatively charged ions such as chloride.

The researchers confirmed that there was a triple benefit of the DCAD supplement for older cows, with slightly cautionary results for younger animals.

“This was the largest study of its type to use rigorous methods under real-world conditions, which makes our results directly relevant and translatable for dairy farmers, nutritionists, and veterinarians,” says LeBlanc.

“While there is speculation of a trade-off between health and reproduction -- namely, that the more milk a cow produces, the more challenged her health or fertility may be -- this wasn’t the case for our study due to this DCAD supplement,” says LeBlanc.

In fact, the researchers saw improved blood calcium in older cows, and a reduction in all cows of two common health problems after calving: displaced abomasum (when stomach becomes filled with gas and shifts out of place in the abdomen) and mastitis. Treated older cows also had a lower incidence of clinical signs of low blood calcium.

The older cows given the DCAD supplement produced more milk in early lactation and had better fertility.

“The results confirmed our expectation that the DCAD supplement would be more beneficial for the older cows. Interestingly, even though the older cows produced more milk, their reproduction was also better, so it was a triple win for older cows,” shares LeBlanc.

“This finding wasn’t expected, and we still are trying to figure out why,” says LeBlanc.

The DCAD supplement is recommended for older cows as a means to nutritionally prevent health problems and to improve performance. Producers are encouraged to consider the preventive option for the low calcium problem and ultimately to improve the health of their herds.

This research study was funded by Landus Cooperative and a Natural Sciences and Engineering Research Council (NSERC) Engage grant with Halchemix.