Reducing the digital divide between rural and urban Ontario 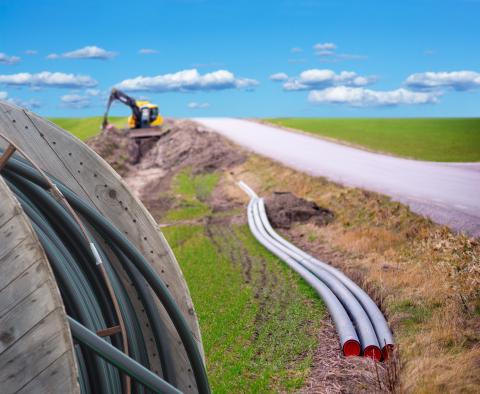 Our e-world requires good connectivity. But that doesn’t always happen in rural areas – even in Halton region, a municipal neighbour to Canada’s biggest city.

Prof. Helen Hambly Odame, School of Environmental Design and Rural Development, is trying to change that. She’s the project leader for the UoG Regional and Rural Broadband (R2B2) project team. In September 2017, the team began collaborating with the Halton area, at the request of the region, in hopes of finding economic reasons to improve its connectivity.

The R2B2 team discovered that rural areas of the Halton region had very limited connectivity, to the point of almost no connectivity.

The team suggested it could be due to insufficient fibre-enabled infrastructure and reliance on wireless technologies that experience interferences due to topography (trees, hills), as well as large volumes of internet traffic.

R2B2 has an ongoing partnership with another regional initiative, SWIFT (SouthWestern Integrated Fibre Technology). Hambly and her team had the opportunity to design a study that focused on broadband internet access among Halton’s rural areas. Halton released two different surveys for rural residents to complete – a residential and farm survey, and a business survey. Over 1,400 surveys were completed.

The study evaluates the availability, consistency, and cost of internet services and with this input, the Regional Municipality of Halton will consider the next steps for policy-level discussions on the benefit of broadband for its rural areas.

“I believe we have created something really innovative,” says Hambly. “When we hear residents and farmers ask ‘Where can I read more on your research’ and ‘Can you get me better service’, it shows our team that the research we’re doing really does matter”.

Hambly says the lack of connectivity in rural Halton compared to urban areas is an example of the digital divide. Some users pay what she calls ridiculous amounts of money per month and still have to be aware of data caps, costing rural residents and farmers extra money out of their own pockets. It is still rare to have unlimited data in rural areas.

In the future, the broadband research program is hoping to develop new methodologies to assess the type of broadband connection and receive feedback from a range of users (residential, farm, public and private sectors).

"There will be sensors and systems that are gathering information on who’s accessing the internet, at what speeds and for what use” says Hambly.

She says it’s important that the digital divide does not continue to widen. This requires an effort from both public and private sectors. The Halton area hopes to see better service in the next few years through fibre optics.

Others involved in the research were Matt Rapke, a spatial analyst and graduate student, and Dr. Jaime Lee, an economic analyst.

This project was funded by the Regional Municipality of Halton and BDO, a chartered financial accounting firm.