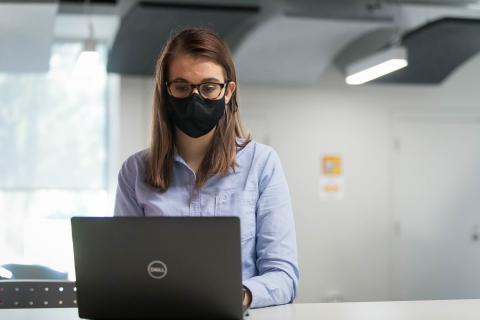 A new University of Guelph study shows that social contacts remained low during the fall of 2020, but work-related contacts increased dramatically.

The study, published in BMC Public Health and led by Dr. Amy Greer, an associate professor in the Department of Population Medicine at the Ontario Veterinary College, looked at how individuals in Canada changed their contact patterns under Public Health restrictions at four different time points between May to December 2020.

“We saw a really dramatic increase in the number of contacts that were occurring in the workplace,” she said. “We didn’t see increases in social contacts in other types of settings – it was almost exclusively a jump in workplace-related contacts by virtue of the fact that many workplaces were requiring their employees to start coming back to the office.”

More than 12,000 people responded to a two-part survey about COVID-19 behaviours and attitudes, including answering questions about adherence to physical distancing recommendations and maintaining a 24-hour contact diary.

Greer and her team found that in the spring, summer and fall of 2020, most respondents had greatly reduced their contacts. But after schools resumed in-person learning in September 2020, many people returned to the workplace, increasing their workplace contacts and their risk of exposure.

At that time, Greer said, essential work was broadly defined, with employers left to decide whether their workplace was essential and whether staff should return. Many workplaces elected to have their employees physically return.

She said many of those workers reported that they would not be able to self-isolate as they lacked paid sick days. They felt pressure to return to the workplace and found it difficult to go unpaid.

“When a worker who is infected with the virus but not yet symptomatic is required to go into their workplace and has no paid sick days they are a risk to every other person who they encounter in their workplace,” she said. “Transmission to other workers may occur, and those workers take the virus home to their families.”

Greer said data supported the idea that workplaces played an important role in transmission, but mitigation efforts had not generally addressed them.

“Instead of implementing more mitigation efforts aimed at these specific workplace settings, we continued to attribute resurgence of the virus to individuals not following public health guidelines. However, our data have clearly shown that most people continued to report significant reductions in their contacts across all settings except for the workplace,” Greer said.

“We pushed mitigation in one setting where people are already making significant changes to their behaviour but in a setting where the risk level is higher we were less willing to act in a way that was actually helpful for reducing transmission.”

This project was funded through the COVID-19 Research Development and Catalyst Fund, the Public Health Agency of Canada, and the National Collaborating Centre for Infectious Diseases (NCCID).