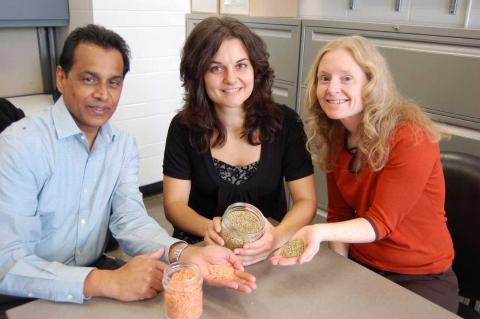 This year, 23 million people globally will have been diagnosed with diabetes, the majority being type 2. Could Canadian lentils potentially reduce the risk of diabetes as they help to lower blood sugar levels? That’s what a University of Guelph research team wants to know.

Diabetes is a disorder that causes people to have abnormally high blood sugar levels over a long period of time. Those with diabetes may not have high enough levels of insulin (a hormone that helps reduce glucose levels in the bloodstream), or their insulin is not working to its full potential.

Prof. Alison Duncan, Department of Human Health and Nutritional Sciences, is focusing on what affects the body’s ability to control its blood glucose level, by trying to create nutritional approaches to prevent or manage the disease.

One nutritional approach is to consume more lentils. Lentils have a low-glycemic index resulting in a low and slow rise in blood sugar levels, which would be beneficial to someone with diabetes.

“If you were to consume a bowl of rice, but add in lentils, you will get a much better glucose response, rather than eating the rice alone,” says Duncan.

As a “pulse” crop, one that is part of the legume family and primarily grown in the prairies, lentils are an inexpensive way to contribute to protein consumption, while also benefiting the environment.

Lentils have the ability to self-produce nitrogen fertilizer, allowing farmers to reduce the amount of nitrogen fertilizer they use and provide future crops with nutrient-filled soil. High quality lentils are greatly desired globally due to the many health benefits they provide. And western Canada produces some of the world’s best lentils, which are in high demand.

Duncan is involved with a research project called Love of Lentils (LOL), which examines the health benefits of adding lentils to food products such as muffins and chili.  She and her team have completed a study that measured blood glucose and insulin response two hours after a person had consumed the lentils and rice in their original form.

Duncan hopes to research lentils further, looking at lower serving sizes of lentils to see if they can also produce the benefits they provide people with diabetes.

“From all of the nutrition studies I have been involved in, such as LOL, it is evident that what we eat really does matter to our health,” says Duncan.

Collaborators on this project include Dr. Dan Ramdath, a senior research scientist at Agriculture and Agri-Food Canada, and UoG PhD student Dita Moravek.

The LOL study is funded by Agriculture and Agri-Food Canada Growing Forward 2 and Pulse Canada Cluster.