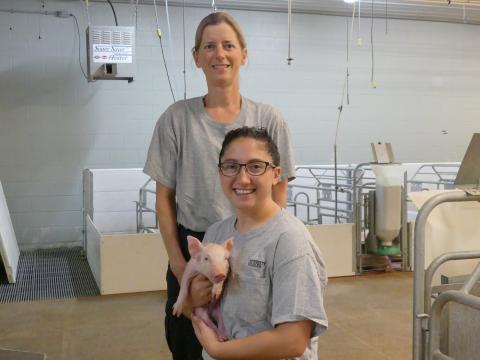 Amanda Perri (seated) and Terri O’Sullivan have improved our understanding of the porcine epidemic diarrhea outbreak of 2014. Photo: Enise Decaluwe-Tulk

Porcine epidemic diarrhea virus is a contagious virus that affects pigs.  While pigs of any age are affected, nursing pigs are most susceptible to the infection.  Porcine epidemic diarrhea (PED) emerged in Canada in 2014. And, according to recent publications and research using network analysis by University of Guelph researchers, the outbreak can be linked to a single feed supplier.

Research conducted by PhD candidate Amanda Perri and her advisors Drs. Terri O'Sullivan and Zvonimir Poljak has analyzed the connections between PED-affected and PED-free Canadian swine herds with feed suppliers. The connections identified in the network containing the PED-affected herds allowed the researchers to identify the feed supplier who played a role in the early phase of the porcine epidemic diarrhea outbreak.

“Network analysis is a relatively new method in the field of veterinary epidemiology,” says Perri. “It has become more widely used because it allows researchers to identify the direct and indirect connections in populations to further understand how disease spread may occur during an outbreak.”

More specifically, Perri utilized information from 22 herds in total which included PED-free, and PED-affected herds during the initial phase of the outbreak. By applying network analysis techniques to the data, the research team identified a single feed supplier that was the likely source of the infection for the PED-affected herds during the early phase of the outbreak.

In addition to the network analysis component, the researchers used randomized computer-generated models to compare the number of observed PED-affected herds connected to a single feed supplier. The research results identified an unusually high number of PED-affected herds linked to a single feed supplier, indicating its importance in the initial spread of the virus.

The next step in this research is to examine and identify other factors that may have been involved.

Funding for this research was provided by Ontario Pork, University of Guelph, Ontario Ministry of Agriculture, Food and Rural Affairs, and the Natural Sciences and Engineering Research Council.