You can help track wildlife health 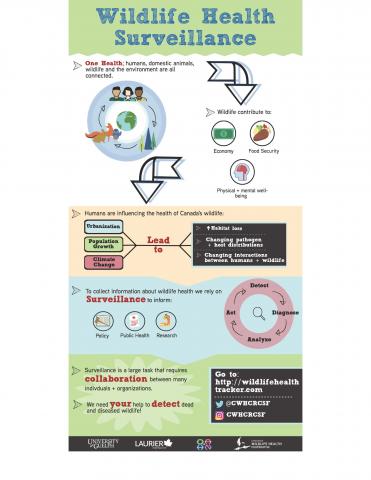 Tracking wildlife health is too large of a task for just one individual, so a wildlife health tracking website (www.wildlifehealthtracker.com), developed by the Canadian Wildlife Health Cooperative (CWHC) at the University of Guelph, is getting the public involved.

The initiative is designed to make it easier for the public and groups interested in wildlife health to report sick and dead wild animals they encounter in Ontario, and eventually across Canada.

Hunters, biologists, and the public can access the Wildlife Health Tracker website to submit their findings online. Their submission will include information such as the location, appearance, state of the animal and any photos they may have taken. That information will then be stored and accessible to the public via the site’s interactive map.

Citizen science activities such as WHT are helping to increase the number of eyes on wildlife and help officials identify potential wildlife health issues – some of which could affect humans.

“The health of wildlife, domestic animals, humans, and the environment are all connected,” says Reist. “By tracking wildlife disease, we will learn more about conditions affecting wildlife health and can develop and implement better programs to protect wildlife health in Ontario.”

Reist, supervised by Prof. Claire Jardine and the CWHC’s Jane Parmley, has created a variety of promotional and educational materials to raise awareness about the WHT.

They have asked WHT users to fill out a survey to evaluate the WHT’s success and how to promote it more effectively. This survey included questions such as how did you hear about WHT and how user-friendly it is.

The site is currently in its pilot phase and will be expanding nationally in the future.

The research team is also interested in looking at how effective the WHT tool is, and how the information submitted to the WHT could enhance the ability to identify changes in wildlife health.

They did this by looking at the type and number of observations that were sent to the WHT, and compared this to the well-established national organization’s reporting system, the Canadian Wildlife Health Cooperative (CWHC). The WHT received about one-sixth of the reports that the CWHC did in a one-year time span, with some overlap of reports going to both systems.

“This tool can aid in the rapid detection of threats and control of disease,” says Reist. “Wildlife health has a vast array of effects, and knowledge of this can broaden stakeholder engagement in surveillance, increasing research in this field and individual investment into wildlife health.”

This project is led by the Ontario/Nunavut region of the CWHC in partnership with the University of Guelph, Wilfrid Laurier University, and the CWHC National Office.