A Taste of International Marketing 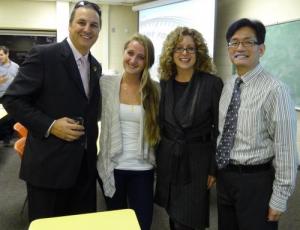 “After today, you will all be able to say that Charlie Pillitteri taught me how to taste wine,” proclaimed Mr. Pillitteri as he instructed the students of Professor Teng’s International Marketing students how to properly taste his award winning Ice Wine. This statement alone does not encompass the breadth of knowledge he shared in his guest speech.

Charles Pillitteri is the CEO of Pillitteri Estates Winery. Born in Canada with an Italian heritage, he describes himself to be “raised on the barrel”. As a true wine fanatic he has found success in distributing Pillitteri’s products locally and to an international market. Under his command Pillitteri Estates Winery was awarded the Top Ontario Food Exporter Award. He is a successful businessman and was truly an inspiration to hear speak.

The turnout for the guest speaker event, on October 30, was tremendous. All students from both of Professor Teng’s International Marketing sections attended and were excited to learn about Mr. Pillitteris’ success in marketing wine internationally.  The class was enthused and all find themselves lucky to have had the opportunity to meet Mr. Pillitteri. It was such an honour to have him come speak to the class. Dr. Christensen Hughes, the Dean of the CME, also attended to show her support of the event.

Having a guest speaker, such as Charles Pillitteri, was advantageous to students because they learned how theories explored in the classroom are used in the real world. Specifically, Mr. Pillitteri taught the class how using the Country of Origin Effect can generate success for companies in international markets. He showed how on each of his wine bottles he included a symbol of Canada, whether it be a maple leaf or an image of a Polar Bear. He told us how Canadian symbols bought him success in the Chinese market, as Canadian products are perceived to be of a higher quality.

Additionally, Mr. Pillitteri taught the class how he found success and failure in his business endeavours because of cultural differences. He informed the students how choosing a good partner would assist a company’s success in international markets because of their distribution channels. In 1995, Mr. Pillitteri obtained his first partner in Taiwan, who distributed rice cookers and thermoses. He asked the class if we believed this to be a good choice as a business partner to distribute wine. The class believed that there’s no way this would be a good choice. They then discovered that it was actually a successful decision. In Taiwan’s culture, it is custom to have rice cookers and thermoses in every home, implying they already had plentiful business contacts to assist Pillitteri in entering the market. This partnership allowed Pillitteri Estates to reach a large distribution market, giving them success in the Taiwan's market. Mr. Pillitteri opened students’ eyes to cultural influences that they otherwise would not have been aware of.

As fourth year marketing’s students, classroom theories have taught us to effectively target and reach various market segments, while taking into account cultural differences. Hearing how these theories can be used effectively in the real world is a huge asset for upper year students, especially when we are on the cusp of entering our own careers in marketing.

Mr. Pillitteris’ scintillating speech was a fantastic way to learn about applying the skills we’ve acquired in school to a job environment. His presentation was interactive and it was beneficial for students to learn about his success in internationally marketing ice wine.

Photos from the event.