We chatted with undergrad student Ally Zaheer about her efforts to save the Lower Duffins Creek Wetland.

Ally Zaheer, second-year Environmental Engineering (B.ENG) student, has always had a passion for helping the planet. Majoring in an environmentally-focused program is not all she’s doing— Zaheer has been actively engaged in lobbying to save environmentally-significant wetlands in Ontario. A recent victory: The developer has backed down from building a planned warehouse on the lands, and a zoning order has been revoked. But for Zaheer, there’s more to be done. We talked to Zaheer about her ongoing efforts to save the environment and her future goals.

You have recently been involved in some impressive lobbying efforts around environmentally significant wetlands. Can you tell us about this?
The Lower Duffins Creek Wetland is part of a provincially significant urban wetland complex in Pickering/Ajax Ontario. A Ministerial Zoning Order (MZO) was issued for this land by municipal and provincial parties. The goal with this MZO was to speed up paving over the wetland so that a massive warehouse could be built. Using this MZO bypasses provincial planning laws and does not allow for public consultation. I was concerned to see this contravention of normal process and with such an important area of land, so I and other citizens in Ontario used our voices to prevent this from happening.

I became the "voice of youth" when speaking with mayors and ministers of provincial parliament. We were lucky to have the support of several high-profile politicians, including Minister of Provincial Parliament, Mike Schreiner.

In February, I organized a shoe strike, where people donated shoes to represent them standing there and protesting—something that we couldn’t have them do in-person due to the pandemic. We gathered 920 pairs of shoes, which we donated to charity afterwards. I was also lead for an email campaign to encourage Ontarians to voice their concerns to the relevant political groups. I had a large role on social media and communicating what was going on in order to raise public concern. 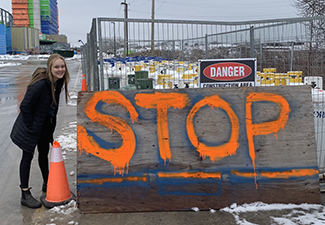 Why have you been so involved in this effort?
Being enrolled in environmental engineering at U of G made things easier as I had a lot of knowledge on wetlands and watersheds prior to getting involved. I saw an opportunity to lead and bring others voices together in order to make a powerful impact. Once I got involved, I was inspired to do more as people looked to me for guidance on the issue.

What are you are hoping to achieve?
The ultimate goal was to get the MZO revoked in order to ensure the wetland is protected. Along our journey, the company building the warehouse backed down from the development after receiving so much public backlash. This prompted the development company to announce that they would not develop this land. After months of hard work, the City of Pickering requested that the MZO for the wetland be revoked by the Minister.

I will continue to fight for our greenspaces. Right now, that means getting schedule 3 of Bill 257 thrown out. This section allows for the lawful use of MZOs on wetlands, farmlands, and forests, making it easier for these valuable areas to be developed for commercial use, which is harmful to ecosystems and the environment.

How does this tie into your goals for yourself and your career?
I hope in the future that I will be able to make sustainable change at provincial and federal government levels to serve people and the environment. I want to get into politics after graduation, and I’m thinking about going to law school. Throughout all of this, I have furthered my interest in politics by speaking with politicians and debating bills.

I have learned a lot about environmental policies and planning acts. I hope that I can keep getting involved in things like this as they allow me to tie together my knowledge with political/environmental activism.

What role has the University played in your efforts and goals?
My connections on social media with students and clubs at Guelph was super helpful in spreading the messages. This was so helpful during our letter writing campaign where we got people to voice their concerns through emailing their MPP. The support at our weekly work meetings from Jana Levison and Dustin Brown was encouraging!