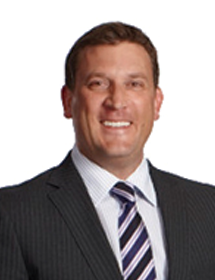 Andrew Marsh's connection with Guelph dates back all the way to the 1930's. His grandmother graduated from Macdonald Hall in 1934, while his father graduated from the Ontario Agricultural College in 1961. Marsh, who graduated with a BA in Economics and Finance in 1990, also has three siblings who attended the University of Guelph. Even his son is attending the University of Guelph for Computer Science. Needless to say, the Marsh family is well connected to the Guelph community.

Growing up on a farm in Petrolia, Ontario, Marsh didn't have much exposure to "big business" but had a keen entrepreneurial spirit. A self-described "farm kid," Marsh said that the business program at Guelph was an eye opening experience. "It put me on the path to work in financial markets and in the wealth management industry," says Marsh. He fondly remembers his time at the all-male residence, Johnston Hall and the friendships he made in all of his classes at the University.

Marsh has been in wealth management for over twenty-five years. Appointed CEO of Richardson GMP Limited in 2010, Marsh was previously Managing Director, National Sales of Richardson GMP Limited and a founder of GMP Private Client L.P. for six years. In this role, he oversaw day-to-day operations and national business development. He also serves on the board of directors for Right to Play Canada, and is a member of the Board of Governors of the University of Guelph.

Outside of his role at Richardson GMP, Marsh's next passion will be mentoring the "up and comers in the company and to give the younger generations the same chances that I had as a young person." He is also thankful for the education and training the Guelph program gave him. The BA in Economics "truly prepared me for my career," says Marsh.