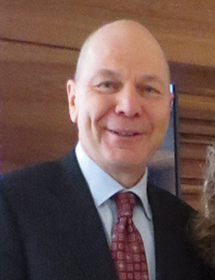 Working for one company for 40+ years doesn't happen often in today's business world. But for David Larone, Senior Managing Director of PKF Canada, a CBRE Company, a consulting firm for the hospitality and tourism industry, he wouldn't have it any other way. David's journey into the hospitality and tourism industry happened almost by chance. On the advice of his high school counsellor, David decided to apply to Guelph's HAFA (Hotel and Food administration) - one of the longest serving hospitality programs in North America. After visiting the Guelph campus, he knew that UofG was for him. Being from a relatively small community, he appreciated the close-knit, community feel of the campus. Compared to larger campuses that sprawl across a large city, Guelph, David said, felt like home.

While enrolled at Guelph, he met his influential mentor, founder of the School of Hospitality, Food and Tourism Management, George Bedell. A self described "brash" and "confident kid", David says that Mr. Bedell immediately took him under his mentorship to try and harness his enthusiasm for the hospitality industry. His lasting advice to David was that "victories all belong to the team - failures are yours to keep." This team oriented approach to management still carries with David to this day - a key to his career success.

David also appreciated that the faculty at Guelph were experts in the hospitality industry and were able to translate their extensive experience into their lessons - something that is still true today. However, his professors were quick to point out that the degree he would graduate with doesn't necessarily mean that you know everything. It does show, however, that you have the ability to learn and adapt in a managerial setting. He says that, like any industry, you need to get your hands  dirty, work hard and learn as much as you can in as short a period of time as possible.

Immediately after graduating from Guelph, David joined PKF Consulting in 1975. He has been a partner and director at PKF Canada for over 30 years. Since that time he has been instrumental in the development of the Canadian division. Actively involved in all aspects of consulting to the hospitality and tourism industry, David concentrates his activities in the areas of asset evaluation and asset strategy; hotel valuations and acquisition due diligence/underwriting; management contract and franchise negotiation. However, David’s knowledge and experience is also more broadly based, touching on a diverse range of topics including resort development and operations, tourism marketing and promotion and property taxation.

David has been instrumental in the growth of Guelph's School of Hospitality, Food and Tourism Management (HFTM). He is a long serving member of HFTM's Advisory Board and a past mentor in the Executive-in-Residence program. Over his career, he has hired a significant number of Guelph HAFA graduates as they historically produce graduates with a "focus on business foundations and principles" that is crucial to today's hospitality industry.

A degree won't necessarily show people that you know everything. It shows that you have the ability to learn and grow with a company" - David Larone