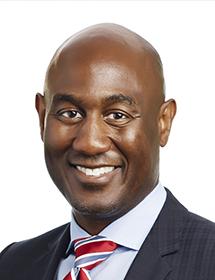 Since his graduation from the University of Guelph, Earl Ellis’ career has spanned multiple industries and locations. His journey up the corporate ladder has taken him across Canada and to the United States, but regardless of his home address he has remained connected to his alma mater.

Ellis credits the University of Guelph with giving him an education that allowed him to gain a strong foundation in business while also focusing on other relevant subjects such as sociology and organizational behaviour. Following graduation, he started working with an accounting firm and decided to pursue his Chartered Accountant (CA) designation. Fast-forward almost three decades later and Ellis has worked in senior roles with some of North America’s most recognizable brands, including the Campbell Soup Company, Coca-Cola, Kraft Foods, Canadian Tire and now Best Buy.

“What I loved about U of G was definitely the comprehensive program,” said Ellis. “The education I received offered a really good balance and a strong foundation to enter the business world.”

“When I started to specialize in consumer packaged goods, I had opportunities to work with top tier food companies,” said Ellis. “I wanted to have a breadth of experiences and I ensured that as I moved up I also moved across the organization.”

This range of knowledge qualified him to take on top finance roles at Campbell’s and Canadian Tire before taking on his current position with Best Buy Canada, where he sets the tone and direction for the organization on everything from capital allocation and controls to operational efficiency and accountability for results.

Outside of his busy career, Ellis remains a part of the University of Guelph family through his work with the Board of Governors. When asked why he decided to stay connected to the university, he recalled a promotional campaign from the 1980s with the tagline, “I owe it all to Guelph.”

“As I took on my first role after graduation in an accounting firm where I leveraged the fundamentals I took while at Guelph, I really felt I owed it all to Guelph. When offered the opportunity to give back, I relished that opportunity.”

“As I took on my first role after graduation in an accounting firm where I leveraged the fundamentals I took while at Guelph, I really felt I owed it all to Guelph. When offered the opportunity to give back, I relished that opportunity.” - Earl Ellis