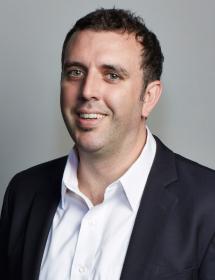 The next time you go to the bank or build a teddy bear, you might be using technology developed by Infusion, a New York-based company that specializes in custom tech solutions that are as unique as the companies that use them. The company’s recent projects include touch-screen technology for RBC and Build-A-Bear.

“We believe that tech is a first-class citizen and the user is a first-class citizen, so we try to combine them,” says Geoff MacNeil, B.Comm. ’04, vice-president of U.S. sales at Infusion. It’s his job to stay one step ahead of emerging technologies so that Infusion can provide its clients with the latest innovations. “You always keep your head down on today but keep your eye on the future,” he says. “You can’t be complacent in the niche market that we’re in.”

Working with the start-up community, Infusion brings new technology to the market and adapts it for their clients’ needs. Key to the company’s success is keeping its finger on the pulse of tech trends such as robotics, biometrics and vision-based technology. MacNeil says he was drawn to work in tech sales because of its global impact and rapid pace. “It’s nice to be at the forefront of something that’s such a driver of change.” He points to wearable technology as the next big thing and is working with companies to develop devices that cater to consumer demand.

Prior to graduating from the University of Guelph's commerce program, MacNeil was afforded some amazing opportunities that changed his perspective on business. In 2001, MacNeil took a break from his degree to pursue a job offer at the UNESCO/Canadian Foreign Service, conducting economic analysis in a number of developing countries regarding their IT infrastructure and its economic impact. He had every intention of following in his godfather's footsteps in becoming a UN diplomat, but instead decided to pursue a career in IT. After returning to Guelph to complete his degree, MacNeil started working for Sun Microsystems. In 2009, MacNeil started working for a start-up, Infusion. Since 2009, the company has grown from 250 employees to over 600+ globally.

Studying economics at U of G helped him identify successful start-ups, he says, while working two jobs and playing varsity basketball taught him time management skills. One of his favourite memories at Guelph was competing in a case competition for Sleeman breweries. The case competition saw MacNeil develop a new strategic direction for the brewing company. This hands-on experience would prove invaluable throughout his career. He also attributes his diverse course selection to his success in the software industry. "Everyday I discuss different challenges across multiple industries including agri-business, accounting, human resources," says MacNeil. "Guelph's diverse B.Comm curriculum allowed me to understand the needs from each facet of business."

His advice to soon-to-be Guelph alumni is to "be a do-er." The career paths have changed in a short period of time, says MacNeil. "Previously, you would be forced to 'pay your dues' and wait for your time. Today, you need to have that entrepreneurial spirit to advance your career."

Portions of this biography were taken from an interview featured in The Portico, written by Susan Bubak