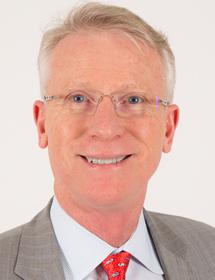 Ken Miner’s lifelong dream of becoming a veterinarian came to a halt when he discovered that he was allergic to certain animals. By then, he was already enrolled in the science program at U of G with the intention of attending the Ontario Veterinary College. While taking courses outside his science studies, he discovered a new interest: economics. Not only was he fascinated by it, he excelled at it. Changing course and graduating with a degree in economics in 1982 was the first step toward a lifelong career in finance. He recently retired as vice-chair of TD Asset Management (TDAM).

Miner eclectic academic career didn't just stop at his change in programs. Ken was heavily involved in debating teams at Guelph, which gave him the opportunity to "examine philosophical issues critically, logically and quickly." Miner even enrolled in philosophy courses to broaden his outlook. "One of the best topics I studied at Guelph was Plato's theory of logic."

One of the highlights of his career was hiring “a lot of great stars,” who have gone on to become stellar teams. One of those teams won the Morningstar Canadian Investment Award for fixed income team of the year two years in a row. “To hire people and help coach them to become superstars is phenomenal,” he says. Miner also played a key role in TDAM’s expansion into the United States. After TD bought Bank North and later merged Waterhouse with Ameritrade, Miner helped mould their portfolio managers into one team and added extra staff. “Our team is capable of providing excellent offerings to our wealth channels in the U.S.,” he says. TD invested $20 billion in its U.S. expansion and now has more branches there than in Canada, building a platform for continued expansion.

Miner joined TD Asset Management Inc. in June 1991 and has more than 30 years of experience in domestic and international fixed income and currency markets. As the Vice Chair of Fixed Income at TDAM, he and his team were responsible for the overall management of all active, passive, derivative and structured fixed income mandates, as well as money market and foreign exchange encompassing retail and institutional (insurance, corporate, pension and union) assets. Prior to joining TDAM, Ken was Director of Fixed Income Investments at a UK life and P&C insurance company.

After taking some time to refresh after his 20+ year career at TD, Miner has joined OMERS Capital Markets as the Executive Vice President and Senior Managing Director, Fixed Income, Currency and Balance Sheet Management.

To be successful in finance, you have to be extremely good at anticipating risk" - Ken Miner