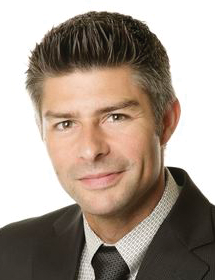 Martin Castellan is a shining example that entrepreneurship lives at Guelph. Along with his brother and colleagues, Martin Castellan started the early stages of his business (now the Skyline Group of Companies) while still enrolled in Guelph's Bachelor of Commerce (B.Comm) program, majoring in Management Economics in Industry and Finance. He quickly understood the fundamental economic theory of low supply with high demand and put this theory to practise. Martin's dad helped him and his brother purchase a first house while attending UofG. This was an important lesson for Martin as it allowed him and his brother to manage the property before the age of 20.

The brothers soon purchased their own house (this time, without help from their father) using OSAP loans and help from one of their "aggie" friends. "This felt like it could be a risky investment," admitted Martin, but taught him a sense that you often need to "put your neck out there in order to succeed." The years of managing this property and finding sources of revenue was an invaluable lesson for Martin.

Some of Martin's fondest memories at the University of Guelph included spending time at house parties - but not for the typical fraternizing or partying one would expect. Rather, Martin saw these house parties as an opportunity network with fellow students and ask them questions regarding their own rent and living conditions. "How many bathrooms does your place have? Or what type of laundry facilities?" These parties allowed Martin to better understand his own investments and where opportunities lie within student housing.

The economics and finance focus of his B.Comm program ultimately gave Martin the confidence to know that his investments would pay off. The program also introduced him to monetary and fiscal policies and the understanding of interest rates. Martin states that "being in the property management industry truly helped to bring the concepts I learned in the classroom to life."

As Skyline continued on its aggressive growth trajectory, Martin realized that while he used to label Skyline as a ‘bricks and mortar company’ (because it had no employees), this was no longer the best description, and that with now over 600 employees across the Skyline Group, Skyline is a ‘people company’ grounded in real estate.  Among other things, Martin now focusses on maintaining and developing the culture and values that were prevalent with the three founders in the early years and ensures that as Skyline continues to reach new heights, it remains firmly planted on the ground.

For future Gryphon's about to enter into today’s workforce, Martin's advice is to "be strategic in your career planning but put your foot on the gas once you've got your plan in place."

Although the three co-founders have been in the business of owning and managing rental properties since 1991, Skyline was formally created in 1999. Skyline Apartment REIT was launched in 2006, and has already grown to become one of Canada’s largest multi-residential real estate owners and managers. Skyline Commercial REIT was launched in January 2012, and largely consists of light industrial and office assets throughout Ottawa, the GTA, Montreal, and the 400-series highway corridor in Ontario. Skyline Retail REIT was launched in December 2013, and consists of national anchor-brand retail tenants in Ontario's secondary and tertiary cities.

Skyline Apartment REIT, Skyline Commercial REIT and Skyline Retail REIT are truly unique private real estate investment alternatives that are managed entirely by Skyline. This integrated, full-service business model enables Skyline to drive cost efficiencies while ensuring its high standards are never compromised. Skyline’s consistent focus on quality and refusal to cut corners has been intrinsic to the continued success and impeccable track record of the Skyline brand, and has won the company many industry awards.