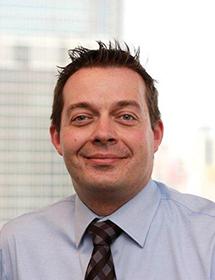 Paul Redman’s road to success in finance started with humble beginnings. Redman, who is currently the Chief Economist and Head of Research at the Ontario Securities Commission (OSC) emigrated from the UK at age 11. Growing up in Toronto, he chose to attend the University of Guelph for his Bachelor of Arts in Economics for a reason shared by many other U of G alumni - the beautiful campus and the charm of the city. “Guelph felt like the small town I grew up in, back in the UK,” says Redman. It was at U of G where Paul built many long-standing relationships, including with his future wife.

After graduating from his undergraduate degree, Redman chose to continue his studies and pursue his Master of Arts (MA) in Economics. “I never had any intention of pursuing my master’s degree until I took a senior level class with professor Bill Furlong,” says Redman. It was Dr. Furlong’s passion and discussion of how economic theory can be applied to everyday life which inspired Redman to pursue his master’s degree.

Following his MA, Redman worked as a securities messenger at Nesbitt Burns. He admits it wasn’t necessarily the most glamorous job, which saw him physically transport cheques and securities back and forth between financial institutions. It was experience, however, that gave Redman insight into the banking and financial world that continues to be of value many years later.

After stops at Reuters and Manulife, Redman joined the OSC in 2002, as an economist. In his current role, Redman leads a team of economists and regulatory policy professionals to provide the OSC with expert analysis of the implications of regulatory policy and financial market developments. One of the more challenging times in his career came during the market crash of 2008. He states, “The rate at which conditions were changing made it that much more challenging to assess risk and where regulators should be focusing their attention.”

Redman also represents the OSC on a number of national and international regulatory committees. He is currently chair of the International Organization of Securities Commissions Committee on Emerging Risk. In that role he works with regulators from around the globe to identify trends and risks in the global capital markets.

For those about to enter into the business world, Redman suggests that graduates should always try to learn as much as they can from each job they have, treating them all as learning opportunities. As a testament to his own career, he states that “what you learn and take away from your current job will no doubt benefit you over the course of your career.”

“What you learn and take away from your current job will no doubt benefit you over the course of your career.” - Paul Redman