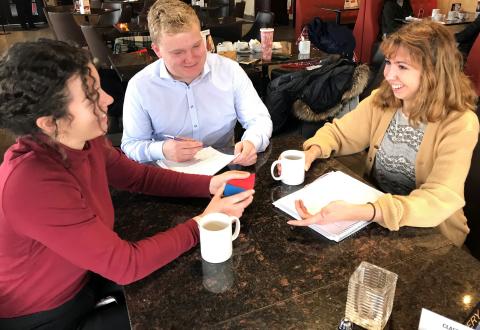 Project SOY Plus Coordinator, Sean Mitchell, meets with undergraduate student group to discuss their project idea - athletic tape that uses food inedibles to create a flexible biofilm that functions as an alternative for taping and icing.

Nineteen student groups have registered to participate in Project SOY Plus, a record for this plant-based product innovation competition.

Three diploma, 11 undergraduate and five graduate student groups have registered, the most ever in the contest’s 24-year history.

This year’s project entries range from herbal treatments and biodegradable menstrual pads to athletic tape that uses food inedible to create a flexible biofilm, an alternative for taping and icing.

New this year is the opportunity for students to develop innovations using plant-based materials other than soybeans.

“The word “plus” is added to the contest’s title because it’s grown beyond soy,” says contest coordinator Sean Mitchell, an undergraduate student in the Environmental Economics and Policy program. “Students can use any plant-based source material for their project.”

Soybeans remain at the heart of Project SOY Plus. Project SOY was launched in 1996 as a joint initiative between the U of G and Guelph-based seed company First Line Seeds, led by industry pioneer and U of G alumnus Peter Hannam.

The contest was introduced to help maintain the momentum of the soybean industry, raise the production and awareness of the crop and create an experiential learning opportunity for students to find diversified uses and markets for soybeans.

Now, more than three million acres of soybeans are grown annually in Ontario for food, feed and industrial use. That makes soybeans the largest grown field crop in the province and one of Canada’s leading commodities.

“Amazingly, soybeans didn’t exist in Ontario as a crop until the 1920s,” writes Robyn Meerveld in the 2019-20 Ontario Agri-Food Innovation Alliance research magazine. U of G breeders then started developing varieties suited to the province’s growing conditions. Decades later, more than 60 new soybean varieties have been released, generating an annual Ontario crop value of $1.7 billion.

Can other plant-based commodities also benefit from student ingenuity? That’s what Project SOY Plus will examine.

This year, student entries will be judged at a finale event to be held on campus on March 17, 2019 for the opportunity to win cash prizes. All students will be encouraged to further enhance and develop their ideas for commercialization and market potential with on-campus resources, such as the Hub Incubator Program and Research Innovation Office.

Project SOY Plus is supported by Food from Thought, with thanks in part to funding from the Canada First Research Excellence Fund.