The inaugural Rowntree Memorial Scholarship was bestowed to its first recipient this week.

These are words students and colleagues used to describe University of Guelph chemistry professor and chair Dr. Paul Rowntree, who passed away in July 2020  following a brief cancer illness. Rowntree is remembered fondly through the Department of Chemistry’s Rowntree Memorial Scholarship established in 2021.

The award was established by the Department of Chemistry through the generosity of the Rowntree and McKnight families and with support from Alumni Affairs and Development.

“Paul was uninterested in accolades like a plaque or another physical representation of his life,” says chemistry professor Dr. Daniel Thomas. “But a scholarship—something that would help students in the years to come—now that is something he would have wanted.”

Rowntree was an internationally recognized expert studying complex molecular reaction dynamics on surfaces. He also worked with industrial partners such as Vale, an international mining company, on nickel refining or with local companies developing fuel cell based automotive engines for reduced carbon emissions.

At a virtual awards ceremony on March 22, the Department of Chemistry bestowed the inaugural scholarship to fifth-year undergraduate chemistry student Mirna Ghattas.

“Through Paul’s unique teaching style, I learned how to think about a challenge from various perspectives,” says Ghattas. “He let each and every one of his students think in their own creative way and let us explore any new feasible project.”

Given how Rowntree inspired her learning, Ghattas wishes he could know the area she would like to pursue for graduate studies: Expanding her knowledge in physical chemistry, particularly projects that have direct industrial applications. 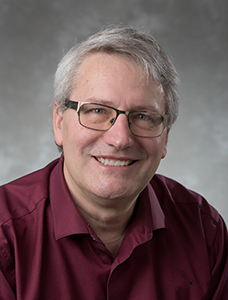 Paul Rowntree’s impact on the University was clear from the moment he arrived on campus in 2006. He didn’t waste a moment in demonstrating his enthusiasm for teaching and research. says Thomas, head of the Rowntree Memorial Committee.

“Paul wanted to launch an interdisciplinary research project unlike anything anyone had ever done. He created a club with about 20 students called the ‘Guelph Near-Earth Observatory,’” recalls Thomas. “He brought together students in engineering, chemistry, physics and biology to design electronic instruments to be launched on a weather balloon.”

Thomas says that Rowntree was particularly skilled in bringing different disciplines together to tackle a problem, and he was especially focused on his students knowing how to build and fix their own instruments.

“Paul was not only a chemist or educator or researcher, but a builder of things. He created a number of large, complex instruments for his research. He was a very hands-on experimentalist.”

In consideration of other scholarships available to chemistry students at the University, the Committee determined that the Rowntree Memorial Scholarship recipient should be a student in third-year CHEM 3440: Instrumental Analysis—one of Rowntree’s favourite courses to teach, and one through which students gained hands-on skills in instrument building. Each year, the scholarship will be awarded to the top student from the class. This year, that student was Ghattas.

“Paul was one of the kindest people I have ever met and to receive a scholarship in his memory is truly a humbling honour,” she says. “He ensured that all of us knew that our research group was like family.”

The Rowntree Memorial Scholarship will be awarded annually and is accepting donations to support its endowment.

Rowntree’s impact has resonated among hundreds of students over the years, some still at the University and others who have graduated. Several students who worked with and studied under Rowntree wrote about the influence that he had on their lives:

“I took CHEM 3440: Instrumental Analysis with Paul. He could liven up the class even if it was early in the morning while the rest of us were tired and groggy. You couldn’t help but learn. He would connect the content to real world examples; things you might not think about but are entirely useful for real-world and professional careers in chemistry.

Making those connections were important for the bigger picture. I was also one of the last graduate students he supervised. As my advisor, his creativity and aptitude to discover new things and be a builder and inventor really helped shine a light on science in a way others may not. For example, all of the instruments in our lab were home-built with Paul there every step of the way. He even tried building a CNC machine in his garage that ran away from him! He was a learner at heart, trying to discover new things every day. He would send me papers to read at two o’clock in the morning (what a wild guy), because he cared and knew it would be valuable.

Things were not always smooth sailing and there were times that our relationship was challenged or that I was struggling, and my master’s progress wasn’t where Paul wanted. He took me on as a student even though at the time I thought I wasn't good enough for a graduate degree. He took a chance on me and I will always appreciate that. Two things that Paul strived for will stay with me: To leave a clean wake and strive to always learn.”

Paul was so influential in his tutelage. He practiced the Socratic method in an unthreatening way, and he made the village that it took to raise the scientist.

Paul helped me (and all of his graduate students) internalize our loci of control. If a machine wasn’t working, we would take the time to troubleshoot, take it apart, and put it back together with his support and guidance. No one was ever helpless in the Rowntree lab.

After graduating, I still feel these effects. Through diligence and creativity, there is little that we cannot influence.

“Paul was the best professor I’ve had. He had a rare combination of being very knowledgeable and also passionately enthusiastic. He was the kind of person who was always building and programming instruments in his garage – a testament to his expertise and enjoyment of his field. He’d then bounce into class with the latest spectrometer he’d built out of Lego under his arm, or some fancy optics he’d taken out of a working instrument in his lab earlier that morning.

Paul’s lab was heavily reliant on custom-made, custom programmed equipment – doing cutting-edge chemistry that in many cases couldn’t be done anywhere else in Canada. That meant repairs were also up to us.

He was genuinely interested in people. He loved music and took great interest in my hobby of barbershop singing. He was always keeping up with the interests of his students, the Chem Club (of which he was a fan, advisor, and financial backer), and others in the department. He often organized events for his research group: lunches out, summer barbecues, or other.

So, did he impact my degree and my career? It’s immeasurable. Even with these examples, everything falls short of who Paul was and what he meant to me. I owe so much of my personal and professional development to his leadership, his example, and his friendship. I am smarter, more inquisitive, more compassionate, more hopeful, and more loving for having known him. His loss is indescribable to us all, but I am grateful and inspired as a member of the Paul Rowntree Memorial Committee for the chance to establish this scholarship in his memory.”

“The nature of learning chemistry requires a certain amount of expert and direct instruction, but I think Paul very much saw himself as merely a liaison of learning. He was a big supporter of self-directed inquiry, and whenever someone had a conceptual question, rather than just give an answer, he’d instead start asking questions. Admittedly, it was sometimes immensely frustrating, but from a learning perspective, it was invaluable; you not only absorbed the material, but also practiced the patterns of logic and problem solving – plus it gave him insight into where you were struggling so he could adapt his teaching material.

Poll his graduate students and every one of us will say that our degrees took longer to finish than planned, but we also emerged from his lab with more than just chemistry knowledge; we learned plumbing, programming, built our own electronics and designed and built our own analytical equipment, and most importantly, we gained confidence in our own abilities to find our own solutions. Sustaining all of it was his belief that knowledge is interconnected, and it is not about how fast you come to the answer, but the path you took to get there.

There are thousands of people who pass through one’s life, but only a handful who literally change the course of it. After I defended my thesis, I stayed in the department and worked for him for about four years. He wasn’t infallible, but he didn’t hesitate to take responsibility for his mistakes. He modelled ethical leadership and always took time to listen to my concerns. He was one of the best ‘bosses’ I have ever had.”