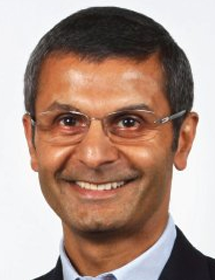 Muneer Hirji prides himself on maximizing every opportunity he has been given in life. In 1975, Muneer and his mother and father immigrated from Pakistan to Winnipeg, Manitoba - a stark contrast of both culture and weather indeed. His familiy worked at modest jobs and encouraged Muneer to explore his passions. Although Muneer was accepted to multiple university programs across Canada, it was his father who encouraged him to focus his career in food services. "People will always need food," his father said. What ultimately sealed the deal for him was a Garland Commercial scholarship for entry into Guelph's Bachelor of Commerce program, majoring in Hotel and Food Administration.

Muneer has fond memories of the Guelph campus. The "Keg" (now known as the "Brass Taps") was a great spot to catch up with friends. But what truly spoke to Muneer was the sense of community that he felt throughout campus, something that he feels is unique to the University of Guelph. Although being independant and living away from his family was a growing experience, Muneer felt that the campus community prevented him from getting home sick.

Upon graduating from his MBA at Western University, Muneer landed a position at the University of British Columbia (UBC) in the Food Services Department which saw him installing a new point-of-sale system. The experience of seeing how new technology can improve systems and efficiencies stuck with Muneer. He soon realized that he was more suited for the software industry rather than food service industry. He took his leadership and commerce training that he learned throughout his post-secondary education and applied it to the growing software and high-tech industry.

After working at UBC, Muneer entered a management training position at Crowntech. After being aquired by IBM, Muneer left Crowntech to join a growing company called SAP where he quickly rose to VP of Sales and Marketing and helped grow the Canadian division of this now multinational corporation. In 1999 he joined Smart Technologies as VP Sales and Marketing, a company focused on supplying B2B sales software including early versions of customer relationship management (CRM) systems - now common place today. In 2004, Muneer became the President of Ideaca, providing management consulting and support services to high tech companies throughout the world. During his time as President, Ideaca grew from 30 employees to over 300 and in 2013 was bought by Hitachi Solutions Canada. Muneer is now the president for 3.0 Corp., a management consulting services firm focused on accelerating profitable growth for B2B software and technology based professional services companies. Muneer also sits on the Board of Directors for TechConnex. The common thread running through all of his business ventures has been the accelerated profitable growth these companies have experienced under Muneer’s leadership.

Muneer states that for individual career success, business students should lead with integrity and have ethics. "Your reputation is so important in today's world as information travels so fast" says Muneer. He also realizes that his career success wasn't just by chance. "I've gotten to work with some amazing professionals, that I have followed throughout my career. The key to career success isn't just who you know - there's a lot of luck involved as well."