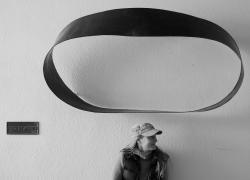 Karen Houle is a Professor of Philosophy at the University of Guelph, in Guelph, Canada. Her university degrees focused first on biology, then history & philosophy of science, and finally political philosophy. She is the author of numerous articles on the following thinkers: Gilles Deleuze and Félix Guattari, Michel Foucault, Spinoza, Jacques Derrida, & Luce Irigaray, and the following subjects: animality, plant ontology, micropolitics, friendship, copyright, & reproductive technology. With Jim Vernon (York University), she co-edited a book of essays on Hegel and Deleuze (2013, Northwestern). Houle recently completed a monograph titled Toward a New Image of Thought: Responsibility, Complexity and Abortion (2013, Lexington Press, Outsources Series). She is the author of two books of poetry: Ballast (published in 2000 by House of Anansi Press) and During (published in 2005 by Gaspereau Press), and numerous essays on and about art and art making in non-academic venues. She is also the translator (from French to English, & with the help of Melissa Chong and Pegless Barrios) of Le Quan Ninh's (2011) collection of aphorisms and short essays on musical improvisation entitled "Improvising Freely: The ABC's of An Experience." (Publication Studio, PS Guelph).

in the Fall of 2014 Houle was the inaugural Writer-in-Residence at North House (University of Waterloo School of Architecture), on the rare Charitable Research Reserve...on the banks of the Grand River, just north of Cambridge. The residency was jointly sponsored by rare and The Musagetes Foundation. Houle is completing a collection of poetry from that residency. Here's an article by Laura McDonald that appeared in A/J (Alternatives Journal: Canada's Environmental Voice) about that time & the artistic practice she developed to meld science and poetry: Science and Sensibilities

Hegel and Deleuze: Together Again for the First Time

Toward a New Image of Thought: Responsibility, Complexity and Abortion

Here's a review from Hypatia:

Toward a New Image of Ethical Thought - Hypatia

1992 MA (History and Philosophy of Science) Department of Philosophy, University of Guelph

My current research is following a clue about "becoming" left by Deleuze and Guattari in their magnum opus, A Thousand Plateaus: the concept of becoming plant. For the past few years I have been researching and writing about Plant Ontology and Plant Ethics. This vegetal focus is part of a wider investigation into what is often called "Post-Humanist" Ethics (or "The Anthropocene") including, but not limited to: matter, machines, plants, & animality.

Here is a link to a NY-based blog called "Hopes and Fears" which collated a number of reactions, including my own, to the death of Cecil the Lion in October, in Zimbabwe.

I have also been working closely with artists and curators:

"A Tree by Any Other Name: Language Use and Linguistic Responsiblity" in Ryan and Gagliano (The Language of Plants), Routledge, forthcoming.

"Animal, Vegetable, Mineral: Ethics as Extension or Becoming?" in Symposium 19:2, Fall 2015, 37-56. This is a special issue of Symposium on Ècologie et Philosophie, rédactrice invitée: Manola Antionoli.

"Ecopoésie: Writing Ecological Poetry for Mixed Audiences and Users, A Case Study" . This was a Keynote Presentation at L'École des Hautes Études Sciences Sociales (Paris), as part of the "Forms to Live the Environment" conference, in October 2015.

The Musagetes Foundation has recently launched a webplatform: ArtsEverywhere. It includes essays on art, community, ecology. You can find my essay here: http://artseverywhere.ca/2016/05/18/notes-for-formes-pour-vivre/

If you are thinking about doing graduate work in our Department starting in the Fall of 2016, and would like to work with me (either as advisor, or have me on your advisory committee) please get in touch with me to confirm: a) that I am interested in your research project (and the best person to supervise it); and b) that I am willing to take on new students.

Here are some of the graduate students I am very proud to say I have worked with:

Suzanne McCullagh's doctoral dissertation (defended in July 2014) considers what it means to conceive of action in terms of capacity.  The focus on capacities turns our attention to a broader and more complex set of conditions that contribute to actions.  I argue that Hannah Arendt’s theory of action, in the Human Condition and On Revolution, is significantly similar to Deleuze and Guattari’s concept of the war machine in Nomadology.  The core difference is that Arendt maintains a focus on the individual within a plurality and Deleuze and Guattari point towards heterogeneous processes of individuation.  Where Arendt’s theory of action enables us to consider individual action with and within pluralist human communities, it separates humans from non-humans in such a way that we cannot think new relations with the non-human elements of the world.  A merit of Deleuze and Guattari’s theory is that it enables us to see actions as arising out of human-non-human assemblages.  The locus of agency, however, seems to have become so diffuse that we lose our ability to think of action in ethically and politically significant ways.

Andrew Robinson: The Harms and Benefits of Pornography: An Application of Luce Irigaray's Ethics of Sexual Difference. I offer an original account of Luce Irigaray's ethics of sexual difference as grounded in the existential development of subjects through fecund relationships with one another. I then demonstrate the ways in which dominant forms of gender and sexuality hinder fecund relationships. Turning to Irigaray's analysis of sex work, I demonstrate the harms with which mainstream pornography threatens our existential development, as well as the transformative potential of feminist and queer pornographies. Robinson defended in July 2014.

Lindsay Lerman: Bataille's Nonknowledge: Epistemic Expenditure.  Lindsay is working on a book-length description of Georges Bataille's concept of nonknowledge. Her work on nonknowledge and children's literature was recently published as the final chapter in an edited volume titled Philosophy and Children's Literature. Lerman defended in June 2015.

Daniel Harris: Nietzsche, Friendship, and Fate. In bringing together Nietzsche's scattered but numerous remarks on friendship, I try to overcome the view of Nietzsche that has him as heralding some sort of solitary, sovereign individual. Others figure in interesting and integral ways in the type of ethical work Nietzsche would have us do on ourselves. Dr. Harris defended his thesis in October 2013 and is now doing a Postdoc with Dr. C. Acampora and CUNY.

Niels Feuerhahn, PhD September 2008 – July 2015. Niels' doctoral research focused on the philosophy of memory, particularly the phenomenon of nostalgia. He defended his thesis in July. He is also very interested in the broad field of ethics, especially in animal and environmental ethics.

Matthew Furlong, January 2008 – May 10th, 2011: “Foucault: The Logic of Freedom” Teaching Fellow at University of King’s College, Halifax, NS BA (Vind), MA (Concordia), PhD (Guelph) Faculty Member, Foundation Year Programme, Contemporary Studies Programme. Matthew's doctoral dissertation, which was supervised by Houle, was on the concept of freedom in Michel Foucault's thinking. His master's thesis at Concordia dealt with the relationship between proper names and ethical subjectivity in the thought of Ludwig Wittgenstein and of Jacques Derrida. He currently writes a bi-weekly column for the online magazine The Independent titled "In This Present Crisis."

Anthony Vander Schaaf, Sept. 2005 - Feb. 11th, 2010. “Frankenfood Meets the Gastronome: A Philosophical Analysis of Some Ontological and Axiological Aspects of the Genetic Modification of Food.”

Sasa Stankovic PhD. "The Ethics of Kant's Practice: Or Deleuze's Repetition of Kant" (defended March 2012) Sasa currently teaches in the Foundation Year Programme and in the Early Modern Studies Programme at the University of King's College in Halifax.  He is working on two articles on Kant's ethics.

Douglas Hall, MA. (2010) "Toward a Levinasian Politics of the Animal". Doug is finishing up a PhD program at the University of Guelph, and is writing his dissertation on Aristotle's notion of phantasia.

Lauren Elliott, MA: (2009) Cosmetic Surgery through Feminist and Cultural Narratives: Shifting the Focus toward Account-Giving within Doctor-Patient Relationality. Lauren’s research analyzed feminist responses to cosmetic surgery and both the cultural and discursive context within which this practice has emerged and proliferated. The practice of cosmetic surgery is an increasingly widespread and pervasive phenomenon in 21st century Western culture, and women are overwhelmingly more likely to pursue elective surgical intervention than men. In light of this gender disparity, feminists have asked whether or not cosmetic surgery ought to be rejected as an inherently oppressive practice, or provisionally accepted as a potential mode of empowerment for some women. Ultimately, Lauren argued that feminists should bracket normative discussions about cosmetic surgery, and respond to the immediate ethical demand posed by the women who already participate in it, by turning next to an analysis of the doctor-patient relationship as this context is the space at which individual and structural injustices intersect.

Lauren is now in the juris doctor program at Osgoode Hall Law School where her interests include labour and employment, family, and administrative law. She is currently employed by the Ministry of Community and Social Services, Family Responsibility Office.

Here are some other students I'm proud to say I've worked with in the past and what they are up to now!

Krista Lane walked into Dr.Houle's 'Self, Society, and Freedom' class at the tender age of 17. It was September 11th, 2001. It was a world-changing day, and also a life-changing day for her. The challenge of engraving her own identity has been an evolution of thought and motion from that day. Krista is a proud mom, feminist, lesbian, paramedic, partner, artist, and social justice activist from St.John's, Newfoundland. She works in Nova Scotia as a paramedic, and through her work she is able to promote the continued respect for the queer and trans populations. She is currently on a team that is developing policies and procedures for those patient populations to identify the unique needs of the communities in an emergency healthcare setting and beyond. Krista sits on the Board of Directors for a (soon-to-be) not-for-profit campaign called Don't Be Afraid. It is a campaign with a strong message of anti-homophobia and transphobia, and one she holds very dear to her heart. Krista works to embody a butch identity that holds space with others as a purposeful act of subversion against hegemonic forms of masculinity. She challenges herself to unpack her own male privilege to gain a better understanding of how detrimental unchecked privilege is within the butch-femme dichotomy and how this can inform and manifest itself within queer relationships. She continues to educate herself, grow, and invite others to join her in acknowledging that we are all a work in progress. Krista understands that living a life that reflects the challenges and importance of social justice means a continuous process of attending to her unique positionality of privilege and oppression. She does this so that she may impart this way of being in the world to her son, to ensure that he is an insightful intersectional feminist who promotes positive change through partnering with those whose experiences are often silenced and erased by a systematic privileging of the male experience. Karen helped her begin this life's work, and continues to help inspire and shape it (perhaps more than she knows). www.dontbeafraidcampaign.org

SOME FUN THINGS I HAVE BEEN ABLE TO DO: