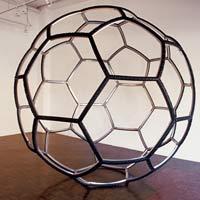 Christian Giroux has been making art with Daniel Young since 2002. They produce sculpture, public art and film installations. Their work is the product of an ongoing conversation concerning the modernity of the mid-century, the production of space and the built environment. Young and Giroux rework modernist forms of abstraction using consumer goods and industrial prototyping methods, construction systems and componentry to produce sculptural objects that partake in architectural discourse. Their film works constitute a form of research on sculptural form in the built environment from the architectural to the domestic scale.