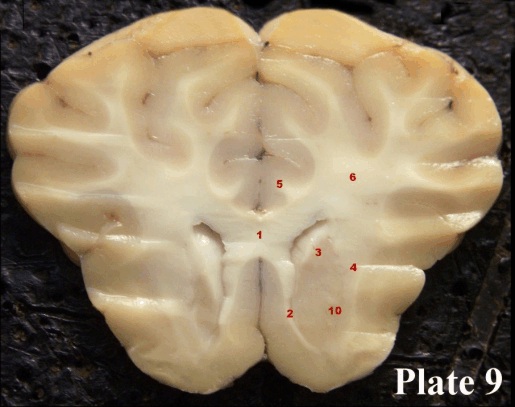 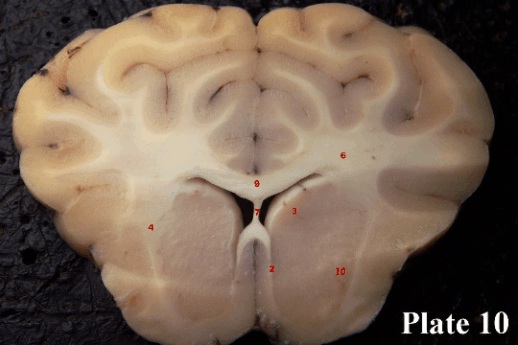 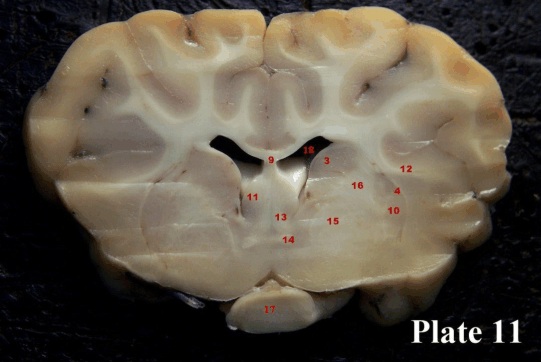 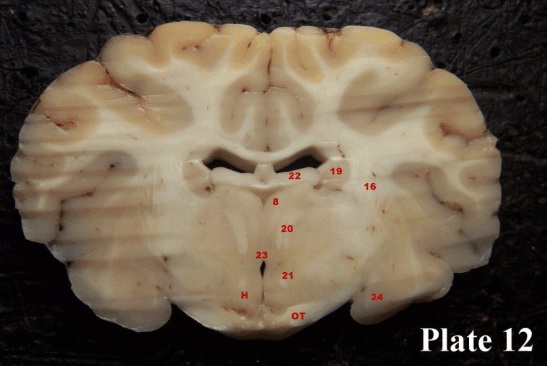 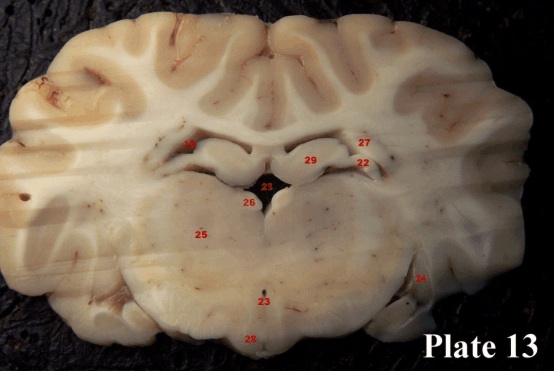 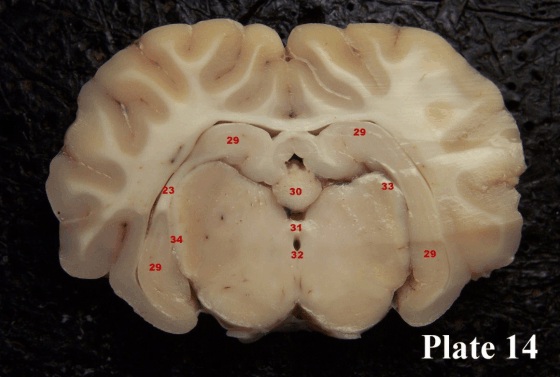 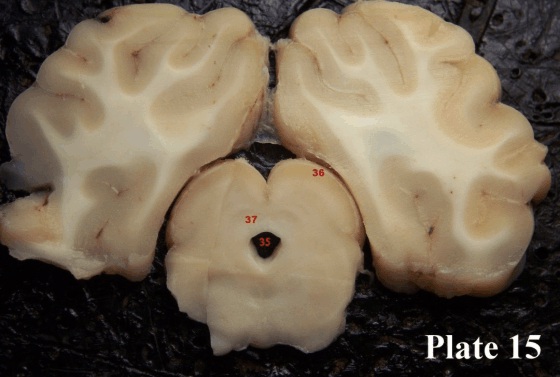 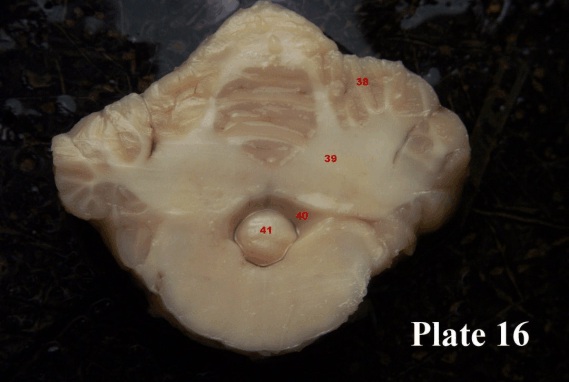 The coronal cuts in this manual were created by shaving the anterior tip of the brain until the genu (1) appeared. When the genu became visible slices where created by making half centimetre cuts, towards the posterior end of the brain. Many of the slices that you make will not match the slices depicted in this manual. This is because you are not necessarily cutting at exactly the same level.

Plate 9: In the centre we see the genu of the corpus callosum (1). The corpus callosum flows laterally into a mass of myelinated fibres which are collectively known as the corona radiata (6). The corona radiata provide all the fibres that eventually stream down between the basal ganglia to form the internal capsule (16) (see Cut 3). Put differently, when the fibres from the internal capsule fan out to reach the cortical areas of the brain, they are given a new name: corona radiata. We can also see, at the ventral and medial aspect of the cut, the beginnings of the caudate nucleus (3) and the beginnings of the putamen in the region indicated by (10). These, you remember, are two prominent parts of the basal ganglia (literally: collections of neurons at the base of the brain). We further see a tract that comes from the septum and goes to the hypothalamic region and the regions of the olfactory cortex of the forebrain, the septohypothalamic tract (2) which also houses fibres that go to the olfactory regions of the brain. In the septohypothalamic tract, there are quite a few fibres that travel to the hypothalamus from the fornix. (4) denotes fibres of the external capsule which contains fibres that connect the putamen to the cortex. The cingulum bundle (5) is made-up of longitudinal fibres that run along the cingulate cortex.

Plate10: Here, the genu of the corpus callosum gives way to the body of the corpus callosum (9). Right underneath, we see the septum pellucidum (7), which divides the left and right ventricles. The septohypothalamic tract (2) is still visible, and the caudate nucleus (3) and putamen (10) begin to really make their appearance. The bits of white fibre striations in that region give that part of the basal ganglia the name “corpus striatum”. The external capsule (4) is still faintly visible. Number (6) is still labelled (What is it?).

Plate 11: At this level, roughly in the region of the crossing of the optic chiasm (17) we see the anterior commissure (14) in the midline, which connects the subcortical regions of the left and right brain halves. The columns of the fornix (13) curving downwards and posterior towards the hypothalamus, have passed through the septum (11) where many of the fibres of the fornix terminate. The white mass of fibres that appears lateral and ventral to the now much smaller caudate nucleus (3) is the internal capsule (16), the very massive fibre system through which most of the output from the cortex runs on its way to subcortical, brainstem and spinal targets. We still see a bit of the external capsule (4) that borders the putamen (10) laterally and we can also see fibres of the extreme capsule (12). These fibres connect the frontal cortex to the temporal cortex and are also known as uncinate fasciculus. We can see the last of the three major basal ganglia in this section, the globus pallidus (15), so named because it appears lighter than the putamen or caudate nucleus. The ventral region of this structure, incidentally, is the target for procedures meant to lessen the effects of Parkinson’s disease. Finally, we see the lateral ventricles (18) larger than in the more anterior sections and the corpus callosum (9) appears thinner.

Plate 12: The lateral ventricles now appear smaller, largely because they are filled by the fimbria (22), the outflow of information from the hippocampus. The internal capsule (16) is visible still. The caudate nucleus has petered out into the tail of the caudate nucleus (19). This slice has cut across a fibre bundle that extends from the mammillary bodies to the medial and dorsal region of the thalamus (8) called the mammillo-thalamic tract (20). The third ventricle (23) makes its appearance and we see two dots on either side, the fornix (21) as it curves posteriorly to reach the mammillary bodies. If you look closely, you will see the third ventricle as a thin slit extending to the bottom of the brain. The thick white fibre bundles at the very bottom are actually fibres of the optic tract (OT). The hypothalamus (H) lies to either side of the third ventricle(23). At the tip of the temporal lobe we have caught the anterior portion of the amygdala (24).

Plate 13: The body of the hippocampus (29) is just starting, and we can also see how the fibres from it form the fimbria (22). The subcallosal fasciculus (27), which consists of fibres that connect the occipital and temporal lobe of the cortex with the frontal lobes and also the insula can be seen squeezed in the corner of the lateral ventricles (18). The main body of the thalamus (25) is in massive evidence and at the dorsal and very medial aspect of it we see the habenula (26). The mammillary bodies (28) are also visible. The third ventricle (23), looms above the thalamus and beneath the hippocampus and also appears at the ventral aspect of the section. Finally, the amygdala (24) is more distinctly visible than in Cut 4. 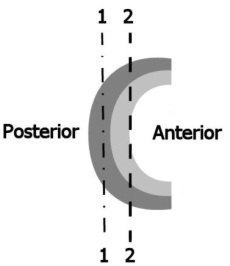 Looking again at Plate 16, the pineal gland (30) lies in the midline, and below it you can see the posterior commissure (31). You can see the third ventricle on its way to becoming the cerebral aqueduct (32). Finally, (34) denotes the fibres of the optic tract as they curve up and into the lateral geniculate nucleus (33) of the thalamus. (32) denotes the beginning of the cerebral aqueduct.