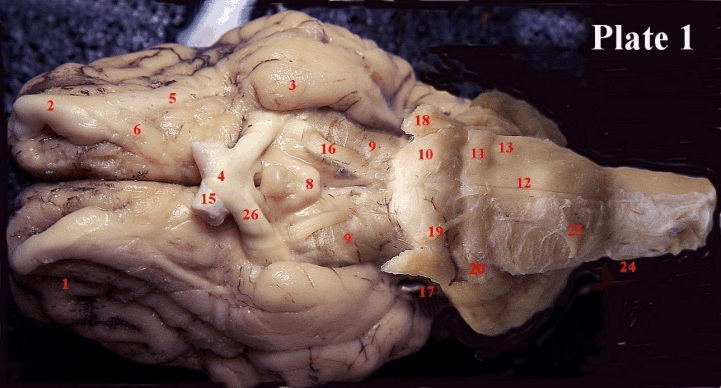 We begin our exploration of the sheep brain with the ventral surface. First, we will orient ourselves by examining some of the larger structures. Then we will proceed by relating these structures to the major subdivisions of the brain. Finally, we will examine the cranial nerves.

Major Structures of the Ventral Surface: The anterior ventral surface is taken-up by the ventral portion of the frontal cortex (1) and the olfactory bulbs (2). Our laboratory specimens often only have a mangled portion of the olfactory bulbs, but we can see the lateral olfactory tract (5) and the medial olfactory tract (6) quite well. These tracts travel from the olfactory bulbs to the periamygdaloid cortex (3), and can be distinguished from the surrounding tissue by virtue of their myelin coated fibres. Myelination gives fibres a whitish appearance. Posterior to the olfactory tracts you can see the optic chiasm (4). Just behind the optic chiasm, there is a little round bulge, often with a small visible opening. This is where the pituitary gland (7) was attached to the brain. Posterior to this you will also see a round protuberance, the mammillary bodies (8). The term "bodies" is used because in some animals one can distinguish both a left and a right portion. In the sheep, as you can see, the two are fused into one round midline structure. Posterior and lateral to the mammillary bodies are the cerebral peduncles (9). These two massive ridges route much of the information that travels to and from the brain. The pons (10), a prominent bulge (What does pons mean? Hint: it’s Latin), delineates the point where the cerebral peduncles disappear from view. The pons is largely made up of fibres that travel from the forebrain to the cerebellum. Eventually, these fibres ascend as mossy fibres into the cerebellar cortex. From the sheer size of the pons, you can imagine that it is an important fibre connection. Behind the pons is a small transverse (by this we mean that it runs from left to right, rather than from front to back) ridge that is known as the trapezoid body (11) (note that the VIth nerve emerges from here). Behind the trapezoid body you will find two massive fibre bundles that run just down the midline on either side. These are formed by the fibres of the pyramidal tract (12). When the fibres crossover a bulge in the tract is created (is this a decussation or a commissure?). Note that the edge of the bulge is where nerve XII emerges. Behind this, the spinal cord begins. The olive (13) is located lateral to the pyramidal tract. Now, let us relate these substructures to the major divisions of the brain. 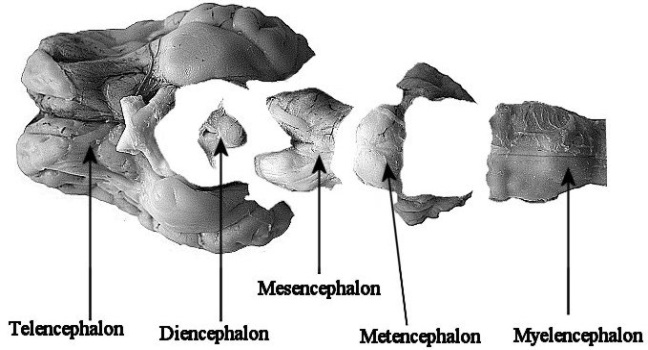 A given cranial nerve may be involved with a whole collection of these systems. As an example, the glossopharyngeal nerve (IX) provides branchial motor output to the pharynx and larynx, visceral motor output to the parotid gland, carries visceral afferent information from the carotid sinus, general sensory information from the posterior third of the tongue (touch and pain) and special sensory information, also from the posterior third of the tongue (taste). You can imagine that the points of origins of the fibres that travel so nicely in this nerve are an anatomical nightmare. You don't have to memorize any of this but for those who are interested, any good text in human neuroanatomy will bring further clarification. We are mostly concerned with the location and general functions of the cranial nerves as we can see them, without paying any further heed to the specifics. The nerves are numbered, for convenience, from I to XII. The numbering goes from anterior to posterior. Thus, the first nerve encountered is I and the last is XII. You can see the point of emergence of most of the nerves in Plate I above. Below, the names and places of emergence are given.

II. This is the optic nerve (15) - not really a nerve in the conventional sense, but part of the brain. As you can see, the optic nerve is quite large. It comes from the eye and reaches the optic chiasm (Greek: denotes a crossing), where some of the fibres cross over to the contralateral (opposite) side, while some stay on the ipsilateral (same) side. Please note that fibres from the eye are called optic nerve (15) fibres before they reach the optic chiasm (4) and are called optic tract (26) fibres after the chiasm. We will later see how most of the optic tract fibres end in a structure known as the thalamus.

III. The first of the nerves that are involved in the movements of the eye, and the largest one of these, the occulomotor nerve (16). This nerve supplies the majority of extraocular (what does that mean?) muscles: the inferior oblique, the inferior, medial and superior rectus. You will see this nerve emerging roughly half-way between the pons and the optic chiasm. Compare the size of this nerve to the other two nerves that run external eye muscles! (IV & VI).

IV. The trochlear nerve (17). This is the only cranial nerve that does not actual emerge from the ventral surface of the brain - it emerges from the dorsal surface and comes curving down in front of the pons (yes, what is the pons?). You may have to probe down between the membranes a bit - the nerve is very slender. The fact that it emerges from the dorsal brainstem means that you won't usually see it emerging from the brain when you view the brain ventrally (although you can see it in Plate 1). This nerve supplies the superior oblique muscle of the eye - helps your roll your eyes. The name “trochlear” means "pulley" (referring to a rope passing over a wheel).

V. The trigeminal nerve (18). This is an absolutely massive nerve that carries sensory information from a region of the face that can best be outlined by imagining somebody wearing a full face mask. It also brings in sensory information from the meninges (the coverings of the brain) and is thus the nerve that brings us toothaches and headaches. It is also involved in chewing movements (operation of the jaws). This nerve can be seen coming out from the lateral aspects of the pons. You can hardly miss it because it is so large.

Depending on the quality of your specimen, you may see Nerve V separating into three major branches (ophthalmic, maxillary and mandibular branches - What do these names refer to?). Plate I only shows a solid trunk but if you poke very gently with your probe, you will see that the trunk of the nerve consists of two parts, a smaller (minor) portion that is the motor portion and a larger (major) one that is the sensory portion.

VI. The abducens nerve (19), runs the lateral rectus muscle of the eye. Thus, if you move your eyes to the side, this requires the finely integrated action of two cranial nerves, the IIIrd and the VIth nerve. This nerve emerges just behind the pons from a little ridge known as the trapezoid body. In size it is intermediate between III and IV.

VII. The facial nerve (20) innervates much of the facial musculature that is used in forming expressions. To the extent that lip movements are used in speech, it is also involved in speech. This nerve is also mixed, since it conveys sensory information from the anterior 2/3rds of the tongue. This nerve also innervates the glands of the head with exception of the parotid glands. You don't only smile with this nerve, but you also cry with it! This nerve is found if you proceed laterally downwards from the abducens. In many of our preparations, this nerve cannot be seen very well.

VIII. This nerve is often called the acoustic nerve (21), but it is actually composed of a portion that brings information from the inner ear (stato-acoustic, cochlear) and a portion that brings information from the labyrinths (vestibular). The former portion is obviously involved in hearing and the latter with the sense of balance and related functions. The vestibulocochlear nerve (the two portions of VIII) lies just posterior to VII, with the vestibular portion being more anterior and the cochlear portion being more posterior. In many of our preparations, this nerve cannot be seen very well.

IX. This is the glossopharyngeal nerve (22), it conveys sensory information from the posterior 1/3 of the tongue and the pharynx. Some say it also has some motor function in the pharyngeal region. Nerves IX, X and XII emerge very closely together, in a messy little bundle. It is unlikely that our specimens will allow you to distinguish between IX and X, although you may be able to recognize XI. They emerge in anterior to posterior order as numbered. The spinal accessory (X) actually comes up alongside the uppermost portion of the spinal cord and runs along until it reaches the area where IX and X come out and then it curves outward, away from the brain with them.

X. This is the vagus (23), that gives you heart pain and tummy aches. This nerve is the major outflow from the parasympathetic division of the autonomic nervous system to the viscera.

XI. The spinal accessory (24) nerve innervates the muscles that you use to bend your head and shrug your shoulders: it runs the sternocleidomastoid and trapezius muscles. Both of these muscles also receive a bit of input from cervical motor nerves. This nerve continues to receive little rootlets from the brainstem as it runs along and you may be able to tell it from X and XI as you trace it along.

XII. The hypoglossal nerve (25). For tongue wagging. Nerve XII is involved in the control of movements of the tongue during speaking and eating. This nerve is quite massive (the tongue is very finely innervated since it has to be capable of very precise movement) and emerges from the posterior end of the medulla as a bunch of laterally spread fibres bundles that merge into one solid nerve trunk as the nerves extends from the brain. As mentioned before, you may be able to see a fringe along the pyramidal tract decussation.

For those of you with a weak memory, there is a little mnemonic device that allows you to memorize the cranial nerves alphabetically: it goes like this: On Old Olympus' Towering Tops A Fin And German Vaults And Hops. (No, it is not by Byron). Plate 1 will give you a rough orientation as to where the cranial nerves are located. Unfortunately, most of the sheep brains we get are damaged in the lower portion of the brain stem and it is not often that you can see all of the nerves. Often you will only be able to see nerves II-VII and XI. For the rest you will have to consult the demonstration brains and plates that are made available.