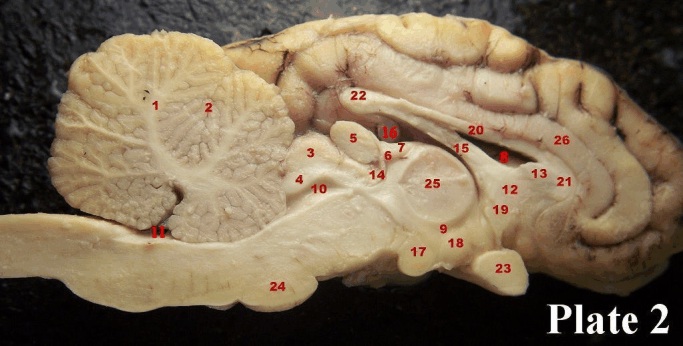 The mid-sagittal cut is a straight forward dissection. Remove the pituitary gland. Turn the brain over. Align your knife or razor by placing it in the longitudinal fissure (between the two hemispheres) . Using smooth sawing motions, cut your brain in half.

We begin our study of the mid-sagittal cut with the massa intermedia (25), the point at which the two halves of the thalamus join across the midline. This joining is not seen in all mammals, or even within all individuals of a species. In humans for instance, only one third of the population has this joining. Dorsal to the massa intermedia is the fornix (15). Above the fornix, in our picture, is one of the lateral ventricles (8). It happens to be the left lateral ventricle. There are a total of four ventricles in the brain. The first ventricle is the left lateral ventricle. The second ventricle is the right lateral ventricle. The third ventricle (9) surrounds the massa intermedia. The cerebral aqueduct (10) which begins just behind the most ventral and posterior part of the anterior commissureb (14), connects the third ventricle and the fourth ventricle (11). The fourth ventricle is situated underneath the cerebellum (1). Mercifully we won’t bother with naming all of the lobes of the cerebellum, but in a later lab we will distinguish between the anterior and posterior lobe. Therefore, it is important for you to note the primary fissure (2) which differentiates these structures. We also see, below the cerebellum, the pons (24), which is formed by massive fibre bundles on their way to the cerebellum from the brain.

The numbers (20), (21) and (22) denote the corpus callosum, the massive fibre bundle that connects upper two halves of the brain in both sheep and humans. The area in (21) is known as the genu while the area denoted by the number (22) is known as the splenium. Genu refers to “knee” and you can remember that the knee points forward and the genu is the front part of the corpus callosum. We can’t help you with the splenium - the name refers to a patch or bandage- and who knows why the anatomists of the 19th century gave it this name. (20) just denotes the main body of the corpus callosum. The cingulate gyrus (26) lies right above the corpus callosum. The number (13) refers to a bit of tissue called the septum pellucidum that normally closes off the lateral ventricle, and which has mostly been removed in our picture (what does septum mean?). Your dissection may have an intact septum pellucidum. (12) is the septum, not to be confused with the septum pellucidum. The septum is a solid aggregation of neurons that is considered part of the limbic system. Posterior and ventral to the septum you see a round white circle. This is a tract and is denoted by number (19), the anterior commissure, a much smaller version of the corpus callosum, which connects the lower portion of the two brain halves. Below, going straight down (ventrally) you will see the optic chiasm (23) sliced right through. Posterior to that you see (18), which denotes part of the hypothalamus and a bit behind that, the mammillary body (17). These can be considered part of the limbic system and you will hear about them in class (it is highly recommended that you read about them in your text as well). Raising our sights again, past the massa intermedia, we see dorsally (7), the stria medullaris, a flat fibre tract that runs into (6), the habenula. Slightly more dorsal to this, hidden in the depth is a glimpse of the hippocampus (16). All of this is part of the limbic system as well. A slightly different bit of tissue, the pineal gland (5) is near the habenula, and, as the name implies, it is tissue that has some functions of a gland. We have already mentioned the superior colliculus (3), concerned with vision, and right below it is the inferior colliculus (4), concerned with hearing which lies right above the cerebral aqueduct.

Finally, this is a good opportunity to recap the major divisions of the brain.