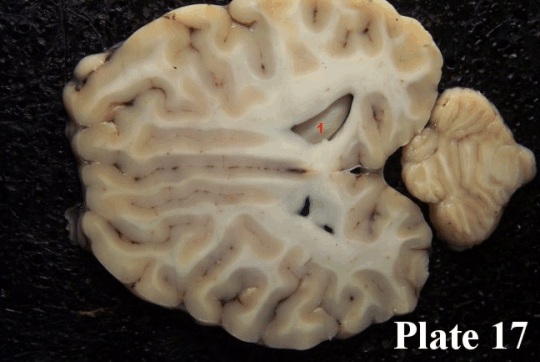 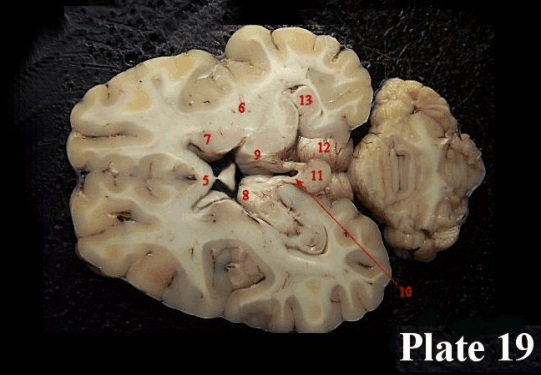 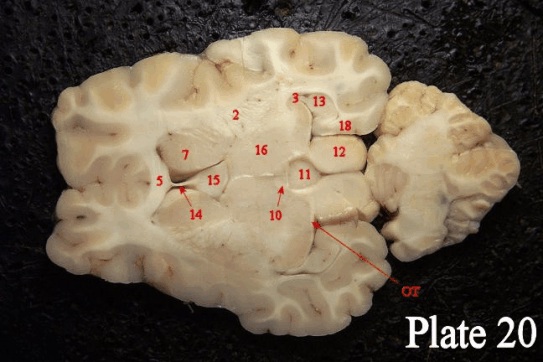 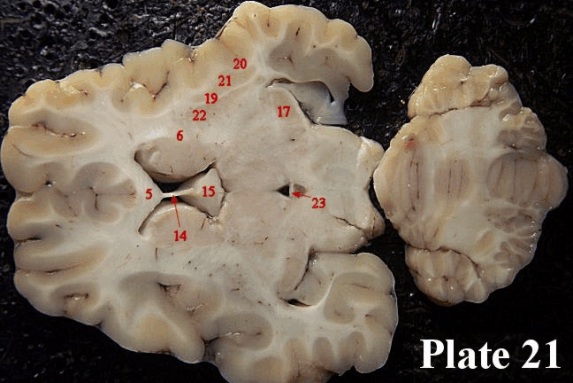 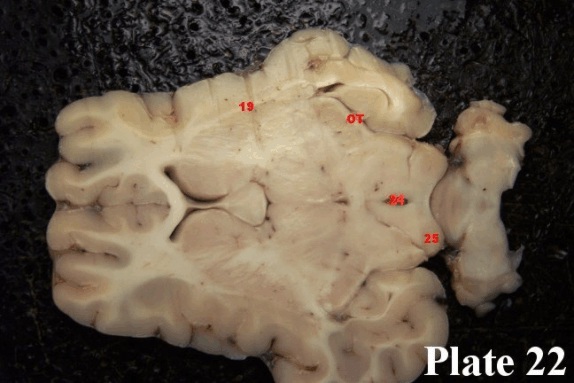 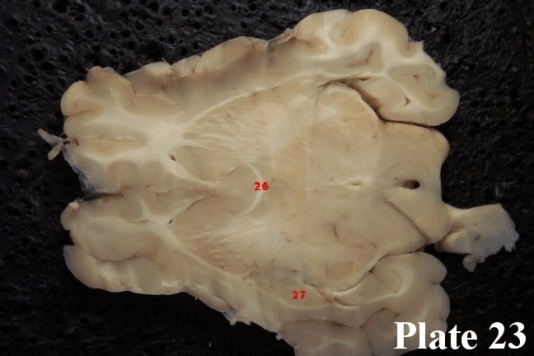 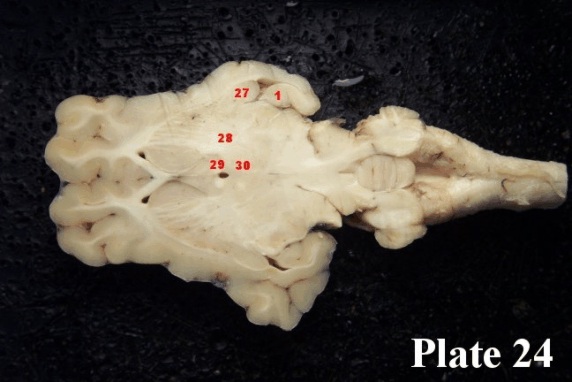 Horizontal cuts are produced by placing your knife or razor at the anterior end of the brain and slicing back to the posterior end. Cuts should be made approximately every half centimetre. Starting at the top and working your way down.

Plate 17: We have courageously cut off a large chunk of cortex with a horizontal cut. The cut is slightly slanted so that it is a bit deeper on the right than on the left brain half. You can see the hippocampus (1) peeking out as it lies inside the posterior horn of the lateral ventricles. On the left side of the brain the cut has just barely nicked the roof of the ventricles.

Plate 19: At this point we have gone considerably below the level in Cut B. The cut is, again, slanted so that it goes deeper on the right side, and we are can now see the internal capsule (6). Also best seen on the right is the caudate nucleus (7) that lies nestled in the anterior horns of the lateral ventricles. The cut has also exposed the anterior part of the thalamus (8) and we can see rather nicely how the stria medullaris (9), the fibre tract that runs along the surface of the thalamus and which comes from, among other things, the amygdala, enters the habenula (10) on each side of the midline. In this view, the habenulae (this is the plural of habenula) are partially obscured by the pineal gland (11). There is a bit of crossover from fibres of each habenula to the other, across the habenular commissure which can be seen as the thin layer of fibres anterior to the pineal gland. The pineal gland is actually an endocrine gland, and as noted before is involved in the production of melatonin.

To either side of the pineal gland we can see the superior colliculus (12). The hippocampus (13) is now seen as a curled structure right behind the posterior part of the thalamus. Behind all this lies the cerebellum. (5) denotes the body of the corpus callosum again.

Plate 20: This cut was taken only millimetres below the last cut. We see a nice view of the septum pellucidum (14), the thin membrane that separates the lateral ventricles in the midline, and right behind it the septum (15). On either side of these lies the head of the caudate nucleus (7), now noticeably thicker than in the higher sections. “Caudate” means “with a tail” and the head is the thick portion that peters out into the tail (which you have seen in the coronal section). The massive central structure behind the septum is the thalamus (16), and at the posterior margin of the thalamus we can see the lateral geniculate nucleus (17). If you look carefully at the posterior margin of this structure (also in Cut E), you can see the thin white fibre band which is made up of optic fibres that stream into the lateral geniculate nucleus from the optic tract (OT). The central small round structure is the pineal gland (11), and just anterior to the pineal gland, on either side of the midline, lie the habenulae (10). Posterior to these we have cut straight through the superior colliculi (12). We also have a nice look at the internal capsule (6) on the right side of the cut. Finally, we can see where the input to the hippocampus (13) flows from the so-called entorhinal cortex (18). The outflow is provided by the fimbria (3), which becomes the fornix that reaches the septum, leaves quite a few fibres there and then curves down and in a posterior direction to provide input to the mammillary bodies. We now see the most anterior part of the corpus callosum, the genu of the corpus callosum (5).

Plate 22: This section shows us the cerebral aqueduct (24) as it conducts cerebrospinal fluid from the third ventricle to the fourth ventricle. Because we are now quite low in the brain, and because we have cut into the cerebral aquaeduct, we deduce that we have now cut through the inferior colliculi (25). Going to a more anterior portion of this section, we have a very nice view of the external capsule (19) and the putamen is more clearly defined. We can now also see the striations (really, stripes) that run across the anterior part of the putamen, and it is from these that anatomists have derived the name “corpus striatum” - striped body - that is often applied to that part of the basal ganglia. The fibres of the optic tract (OT) are still visible.

Plate 23: This we have selected for several features. First, we can see the anterior commissure (26), which connects the subcortical regions of the brain halves. Second, we have a very nice look at the striations across the putamen, plus a nicely defined external capsule. The amygdala (27) makes its appearance on the left side of the cut.

Plate 24: Now we are very close to the bottom of the brain. We can now see all three of the basal ganglia together: the head of the caudate nucleus, the putamen, and the pale region posterior to the putamen and caudate, and lateral to the septum, the globus pallidus (28). You can see why it is called the “pale globe” - it looks very light, more like a fibre mass than a nucleus. Anterior to the hippocampus (1) at the bottom of the temporal lobe, we can see the amygdala (27) on both sides and its oval form gives it the name “almond” because of its almond shape. In the middle of the section, just where the little black hole formed by the third ventricle can be seen, we see four white dots. These are formed by fibre bundles that travel from above this section to below the section - and you have encountered both of them. The anterior pair of dots, just behind the septum, are the two columns of the fornix (29). The posterior dots are the mammillo-thalamic tracts (30) which, as the name suggests, are on the way from the mammillary bodies to the thalamus.