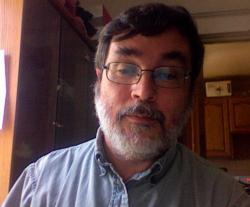 I am currently writing a book length essay on religion and society in the Atlantic world from 1500 to the present. It will be designed for use on websites and eReaders as an interactive enhanced eBook. This format is ideal for a textbook, and presents history in a more realistic form allowing for the depth which marks humanity and its social existence that is more difficult to present in a traditional linear text. A preliminary version is already in use for the students of Hist2260DE.

My particular interest lies in studying the multifarious points of contact and intermingling between religion and society in history, with a special emphasis on religion at the grass roots as something one does, rather than merely assents to in terms of doctrine. I borrow this from the importance of 'lived experience' in gender studies.        - Ted

Healers and Healing in the Dundas Valley (Dundas: The Dundas Historical Society Museum, 2009).

By Design: The Role of the Engineer in the History of the Hamilton-Burlington Area (Hamilton: Hamilton Engineering Interface Inc., 2001).

“150 Years of Vision, Faith, and Courage: The Chamber’s Amazing Story,” in the 150th anniversary issue of Panorama, The Official Publication of the Hamilton & District Chamber of Commerce 22 (June/July 1995).