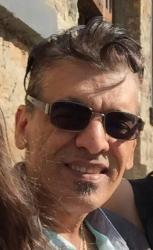 After moving to Canada in 1988, I received all my university education here, earning a B.A. and an M.A. from Carleteon University (1993,1995) and a Ph.D. from the University of Ottawa (2000). In 2002 I was awarded an Andrew Mellon Postdoctoral Fellowship at the New School University in New York. In 2003 I obtained employment at the University of Guelph, where I have been working since.

Social and political philosophy, Critical Theory, German Idealism, contemporary continental philosophy, minority rights, ethics and theories of democracy and justice. I will be happy to supervise any research project along these lines with incoming graduate students.

♦Multiculturalism and the Law: A Critical Debate, University of Wales Press, March 2007.

-"Setteing an Example in the Absence of Freedom," XXIV World Congress of Philosophy, Beiging, 13-20 August, 2018.

-"Setting an Example as Resistance, in the Absence of Any Prospect for Freedom," IICAH International Conference on Arts and Humanities, Dubai, 26-28 February, 2017.

-"The Ineliminability of the Idea of Progress," IAFOR International Conference on Arts and Humanities, Hawaii, 5-7 January, 2017.

-"Tyranny and the Politics of the Second Best," The European Conference on Ethics, Religion and Philosophy, Brighton, UK, 6-8 July, 2015.

-"To be a Courtier In the Islamic Government of Iran," Pacific Northwest Political Science Association's Annual Meeting, Vancouver, 17-19 October, 2013.

-“The Green’s Non-violent Ethos: The Roots of Non-Violence in the Iranian Democratic Movement,” Critical Theory Roundtable, 9-13 May, 2102, Prague, Czech Republic.

-"The Emerging Non-violence in the Iranian Protest Movement ", the 9th International Conference on New Directions in Humanities, 8-11 June, 2011, Granada, Spain.

-"Between revolution and Reform: The Prospect of Non-violent Movement in Iran,” Biannual meeting of the International Society for Iranian Studies, Santa Monica, 27-30 June, 2010.

-“Secularism, Religion and Democracy:On the Boundary of Public Reason,” An International Conference on the Occasion of the 30th Anniversary of the Iranian Revolution in 1979 on the theme of “Retreat of the Secular?” at York University, Canada, May 1-3, 2009.