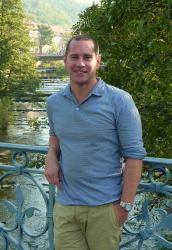 My area of specialization is later medieval thought, especially of the thirteenth and fourteenth centuries. Specifically, my research focuses on the metaphysics, ethics and theology of such such figures as Thomas Aquinas (1225-1274), Giles of Rome (1243/47-1316), Henry of Ghent (d.1293) John Duns Scotus (1265-1308) and William of Ockham (1287-1347). Although much of my work has thus far focused on medieval treatments of such issues as moral weakness, happiness and the freedom of the will, I  have recently become interested in the question of theology as a science. I am also interested in medieval conceptions of the parts of logic, and particularly rhetoric. My research has been funded by a Standard Research Grant from Social Sciences and Humanities Research Council of Canada (SSHRC) and by the Alexander von Humboldt Stiftung/Foundation.