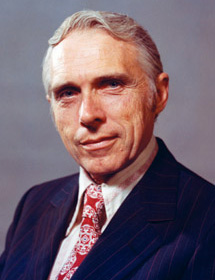 Arthur Latornell’s communication skills made him a passionate educator and respected spokesperson for the environment. He hiked the Bruce Trail and was an avid birder. He was a partner in Fairlawn Sod Farms. His estate, which was donated to University of Guelph, supports numerous grants and awards and the annual Latornell Conservation Symposium.

“Talk is relatively inexpensive. Action takes more real effort both of mind and of pocket book, and is usually less noisy.” – Arthur Latornell

Latornell believed that agriculture and conservation were compatible parts of a sustainable environment, and he devoted his life to educating the public about natural resource management.

Due to the Depression, he remained on the family farm in Meaford until he was 23 and learned from these early years that farming suffered when soil and water were mismanaged. In 1960, he became a charter member of the Ontario Institute of Professional Agrologists for specialists in the application of science to agriculture and the environment. He was also active in the Agricultural Institute of Canada. In the 1950s, when he started his professional career, the Institute was concerned with conservation of natural resources, and devoted the March-April, 1954, issue of Agricultural Institute Review to “The Use and Conservation of Canada’s Farm Lands”.

Water and soil were likewise the concern of conservation authorities, created by the Conservation Authorities Act in 1946. Latornell was hired in 1953 as field officer, where he was actively involved in extension work with landowners and also worked closely in education programs for young people. By 1959, he was head of the Conservation Branch`s Land Use Survey Section, where he organized, planned and administered the land use component of watershed studies. He influenced many colleagues and summer students with his commitment to “planet earth”.