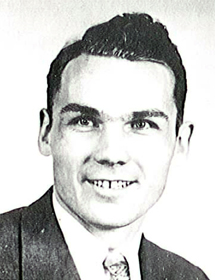 Burton Matthews enrolled at OAC at age 16 after his local MPP wrote a letter on his behalf. He played varsity football, edited the OAC Review, and won numerous academic awards. He was one of the first post-war hires at OAC with a PhD.

“I am confident that agricultural colleges have the professional capability and the orientation toward real problems of people that will enable them to play a crucial role in these new missions, as well as in the traditional mission of increasing food production.” – Burton Matthews

Matthews joined OAC’s Soils Department in 1948 as an expert in soil chemistry. In 1966, he was appointed vice-president (academic) at the University of Guelph. His long and familiar association with OAC led him to play a significant role in designing policies to put the new university, created in 1964, on a firm academic footing. He was involved in crafting the recommendations passed by Senate to retain the College system within the university structure and ensure the continuation of OAC.

In 1969, he became the second president of the University of Waterloo (UW), founded in 1957. During his tenure, UW added the world’s first department of kinesiology, as well as programs in earth sciences, clinical psychology and accounting; these were all emerging fields of academic study. He returned to become president of the University of Guelph from 1984-1988. Among his initiatives while president were a strengthened co-op program, broader multidisciplinary programs, and the new President’s Scholarships for incoming students with exceptional academic standing and leadership skills.

Despite his duties as a university administrator, Matthews retained a special interest in agricultural education. In a short article published in the Guelph Alumnus magazine in 1970, Matthews introduced the concept of interdisciplinary studies. He urged agricultural colleges such as OAC to hire social scientists to collaborate with soil scientists in addressing complex issues of land allocation and collaborative use facing modern society.